FEVER: The Awakening of European Fascism

This project documents the growing racial intolerance – exacerbated by the economic crisis and by political ideologues – expressed by many young people reacting against the massive flow of immigrants to Europe. 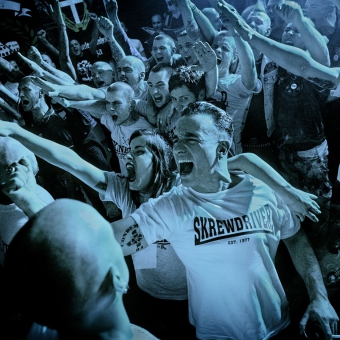 Hundreds of people have flocked to a Nazi Rock concert in Rome. May, 2013. 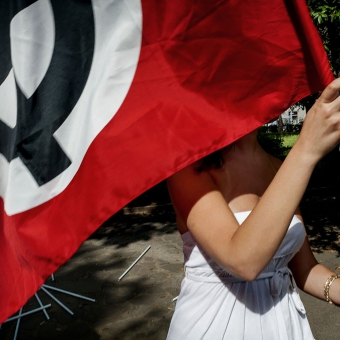 In Milan, a girl holds a flag during a march against foreign policy regarding immigration. 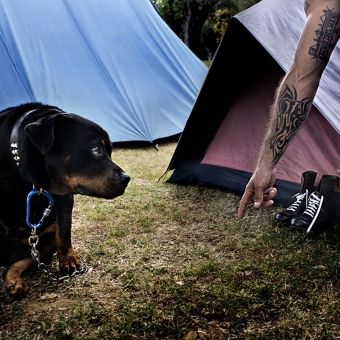 Caio, Armando’s Rotweiller at a campsite in Perugia, Italy. A tattoo on Armando’s right arm reads "Jedem das Seine" -- "To Each His Own" -- the historic inscription on the gate of the concentration camp of Buchenwald in eastern Germany. September 2009. 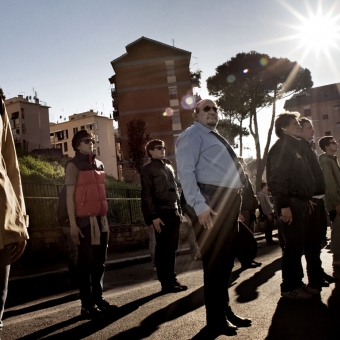 A yearly gathering in honor of the death of the young Mattei brothers, who died in their home in a fire set by the "Red Brigades.” Rome, April 2010. 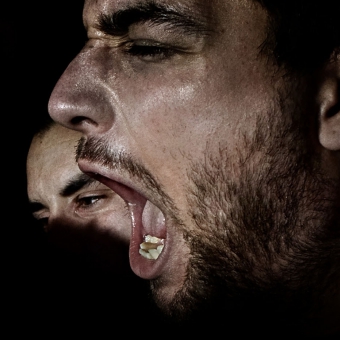 A far-right protester screams during a demonstration against Italy’s left-wing government organized by the "Forza Nuova,” a far-right political party. Rome, January 2010. 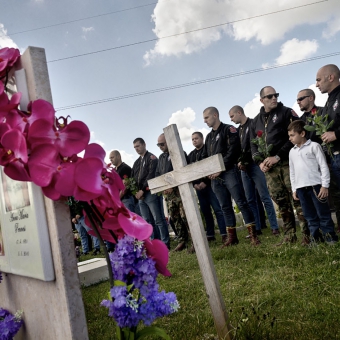 At the “Prima Porta” cemetery in Rome, the "SPQR Skins,” commemorate a “comrade,” who died a few years earlier. May 2013. 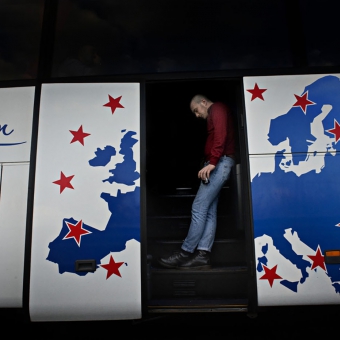 Mirko, 25 years old, who belongs to a skinhead group in northern Italy. He and his friends have rented a bus to take them south, to join a gathering for skinheads from across Europe. December 2010. 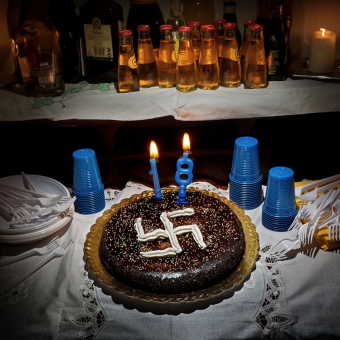 A birthday cake for Gianni, 18 years old, who is a supporter of one of the most extreme fascist groups in Italy. Rome, January 2014. 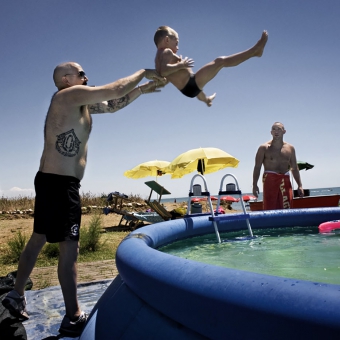 Jamie, a 31-year-old skinhead from London, throws his friend's son in an inflatable pool during a gathering for skinheads from across Europe in Italy. August 2010. 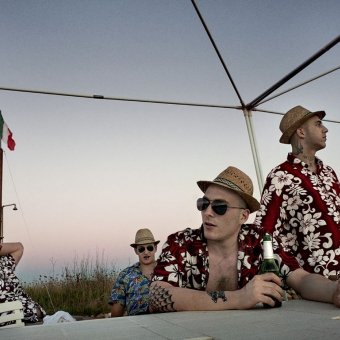 A young Italian skinhead at a party on the coast of Lazio. Each year, Italian skinheads come together to celebrate the beginning of summer, with a Hawaiian-style party. August 2010. 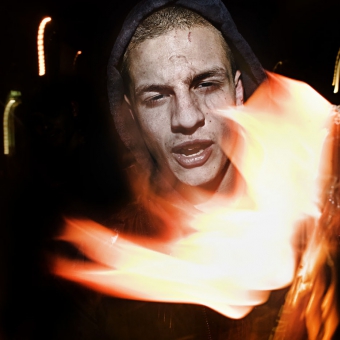 A skinhead named Matteo holds a torch during a march in Rome. December 2009. 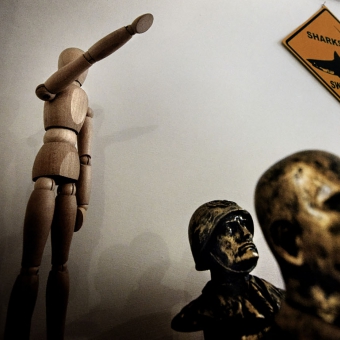 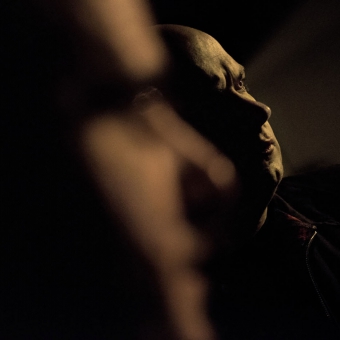 German Fascists during an animated discussion outside a pub. August 2013. 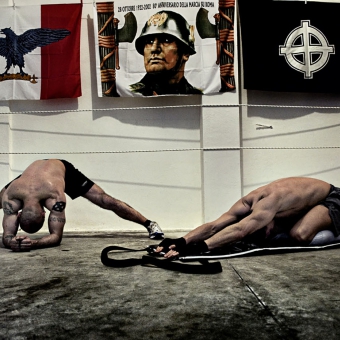 In his private garage, an Italian skinhead named Armando has set up a homemade boxing ring. He organizes training sessions and friendly boxing matches. May 2010. 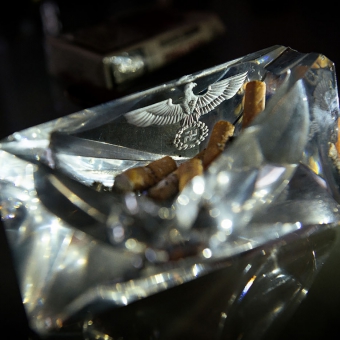 In a German skinhead’s apartment, an ashtray with a Nazi logo. August 2013. 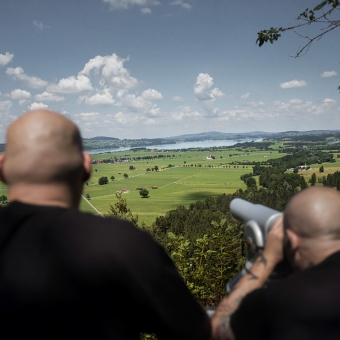 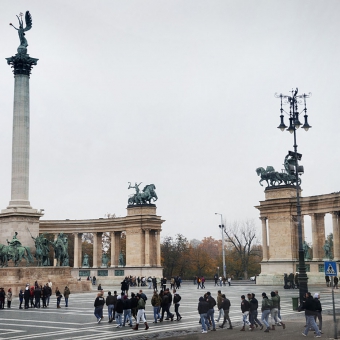 “Heroes' Square" is one of the major squares of Budapest, Hungary. It’s where various factions gather annually under the imposing statue "The Millenium Memorial," which expresses great historical and political  values. 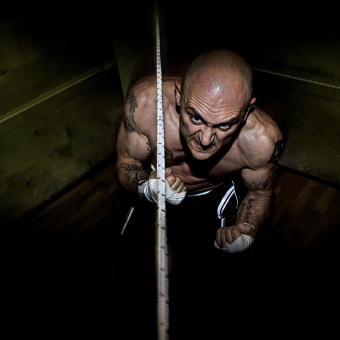 Armando, an amateur boxer in his training session at his home. June 2010. 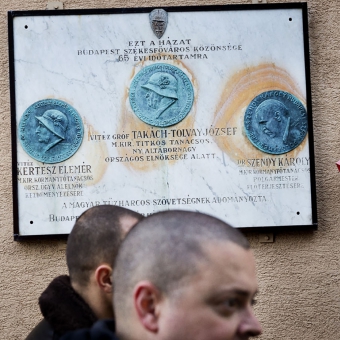 Hungary’s far-right party "Jobbik" – “the Movement for a Better Hungary” -- proposed a law that deems Jews living in Hungary, to be dangerous to national security. Hungary has one of the largest growth rates of young fascists in Europe. Budapest, November 2012. 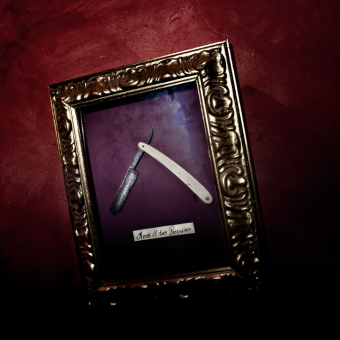 At the headquarters of a far-right group in Milan, a razor is framed with the inscription, “Love your Neighbor.” November 2010. 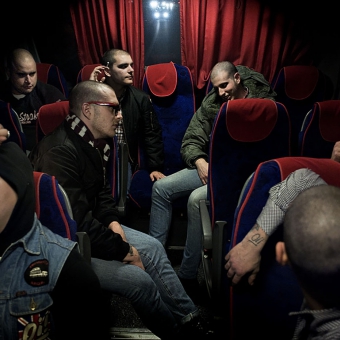 Italian skinheads on their way to a concert in southern Italy. December 2010. 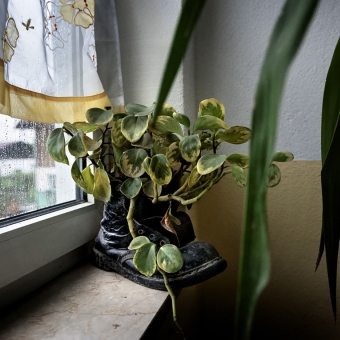 A boot that’s characteristic of the skinhead "look,” in the apartment of a skinhead in Memmingen, Bavaria. Germany, August 2013. 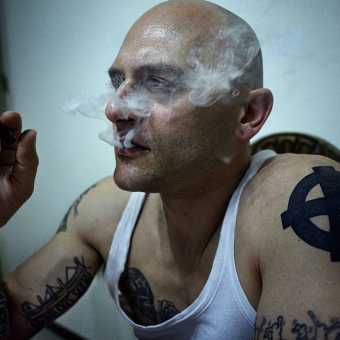 Armando, an Italian skinhead, smokes a Cuban cigar in his flat, close to Rome. June 2010. 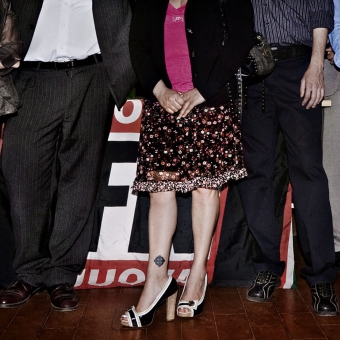 Members of "Forza Nuova," an Italian far-right political party, at a wedding reception. May 2009. 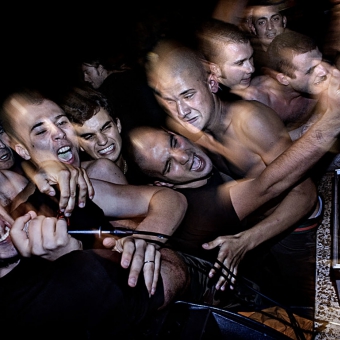 Young skinheads dancing and fighting during a Nazi-rock concert in Padova. Italy, July 2009. 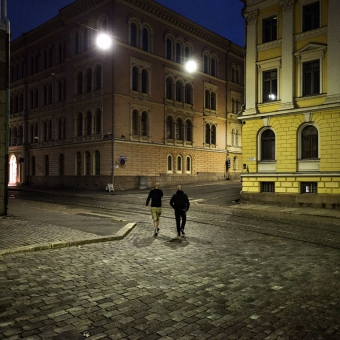 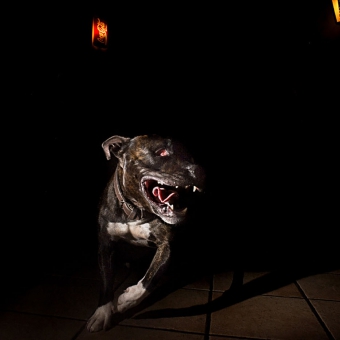 Raus, Gabriele’s Pitbull. Raus is a German word and it means "OUT.” It was a word used by the Nazis against Jews during World War II. 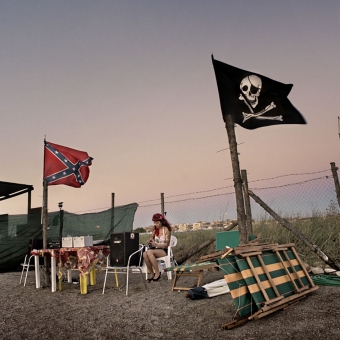 Susan, 27, came with her English skinhead boyfriend from London for a beach party with other skinheads in central Italy. July 2010. 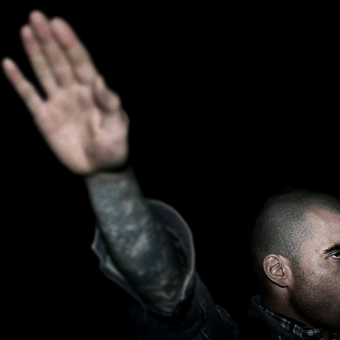 A Spanish skinhead at a meeting for skinheads from all over Europe  in Perugia. Italy, September 2009. 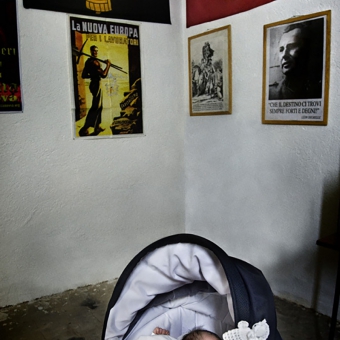 Livia, 6 months old, in a cradle in the private headquarters of the far-right “Forza Nuova” party in Rome. March 2009.

For thousands of years, humans have spread across the planet – one of the reasons humanity itself has survived. This ancient pattern can be a positive force for development, but recent waves of migration to Europe are increasingly perceived by many Europeans as an invasion.

The United Nations Department for Economic and Social Affairs has recently underlined that in the last fifteen years we have gone from 154 million migrants to the current 250 million and in the last five years the situation has soared sharply, especially in   Europe.

The ongoing economic crisis has resulted in a considerable loss of jobs in advanced economies-- awakening old ideological trends dominated by closing our doors on our neighbors and by racial intolerance towards whose who are perceived as invaders and not a resource. In this scenario and with these conditions the word integration has completely lost its integrity, thus acquiring a meaning distorted and frightening.

The massive migrations that are currently occurring in Europe are amplifying the seeds of fear and racial intolerance among many young people, thus triggering anger towards immigrants, who are seen as a concrete threat for society and employment.  These feelings are often manipulated by politicians, who use fear to drive their own nationalist agendas, and who help create an “every man for himself” mentality.

Italy’s Minister for Integration, Cécile Kyenge – who is originally from the Democratic Republic of Congo -- recently described this phenomenon: "The migrations become a problem if they are perceived as a problem, they become a resource if you deal them as a resource. The emergency approach is handling immigration as a problem, and so produces problematic consequences.”

The “fever” of which I speak is the ideological exploitation in which fear is incited by political slogans. In this are the consequences of distant conflicts, able to make noise beyond geographical borders, with an echo that triggers new wars and moves new armies—non-rifle-toting average people who arm themselves with moral  hostility.

Today, those who flee from war do not find peace while the one who professes peace from his living room, armored in his ideological alibis, obsolete and closed, is the author of new conflicts, fueling the flames of intolerance.

In the era of globalization, tens of thousands of people all over Europe, are screaming to the world "I exist. I exist and I am not a product of your companies. I exist because I live my identity, unique and essential and I belong to a people, a religion, a race.”

The perfect storm is ready to rock out -- and fascism is its instrument.

causing tension and closing expressed among those who feel invaded and who basically only seeks a new home.

Paolo
Marchetti
facebook twitter mail
Paolo Marchetti is a photographer based in Italy, Rome.
He has worked for thirteen years in the cinematographic and commercial industry, covering each role in the Camera Dpt.
In his photography he pays particular attention to political and anthropological issues. He has covered stories in Brazil, Argentine, Colombia, Central America, Cuba, Haiti, United States, Central and Eastern Europe, Central and Southern India, China, Thailand, Northern and Central Africa, etc.
His work has been published in Italian magazines such as L’Espresso, Internazionale, Vanity Fair, Marie Claire and many others, also in international magazines and newspapers such as 6MOIS, Sunday Times, British Journal of Photojournalism, The Guardian, Le Monde, Geo, Days Japan, Der Spiegel, Newsweek, CNN, New York Times, International Herald Tribune, Time magazine, National Geographic US and many others.