Goodbye My Chechnya documents the unraveling of the lives of young Muslim girls who came of age in the aftermath of a conflict that lasted nearly two decades. 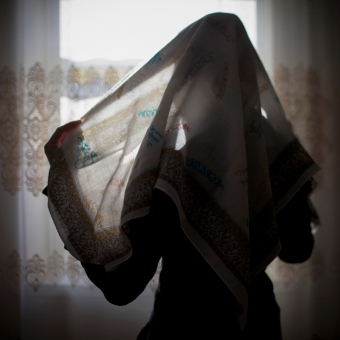 Seda Makhagieva, 15, wraps a pastel-colored head and neck covering around herself. She fought to wear the hijab - a sharp break from her family's traditions. 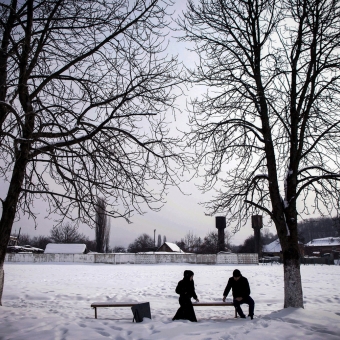 A couple on a date in the small village of Serzhen-Yurt. Couples in Chechnya must meet in public and sit at a distance from one another. All physical contact is forbidden prior to marriage. 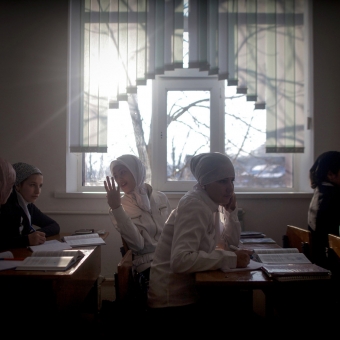 Half of the girls in the ninth grade at School No 1 in the Chechen village of Serzhen-Yurt wear a hijab. The head and neck covering is a sharp break from Chechen tradition. 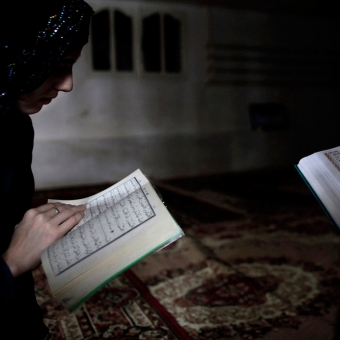 Chechen girls study the Koran at an underground medrese in the village of Serzhen-Yurt, Chechnya. The new generation of youth are embracing Islam after decades of religious repression by secular Communist authorities in the Soviet Union. 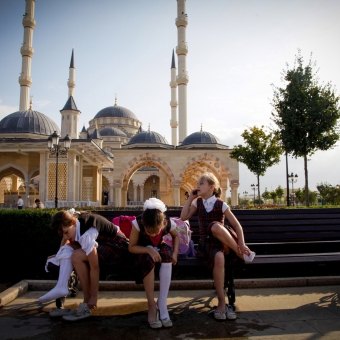 Chechen girls after school in front of the Heart of Chechnya mosque, the largest in Europe. All Chechen girls, despite religion, must wear a head covering in public schools and government buildings. 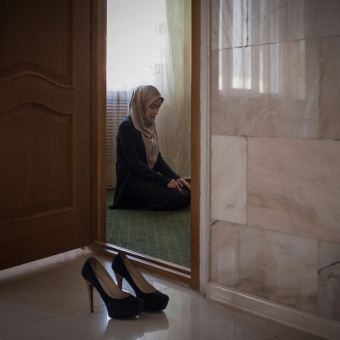 Amina Mutieva , 21, a student at the Islamic University in Grozny prays in aprayer room for women. 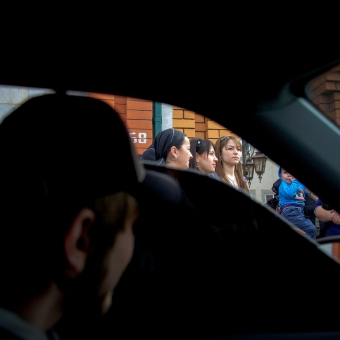 A Chechen boy checks out a girl from his black tinted window. Despite official measures, bride kidnapping continues to be an endemic problem. Young women in Chechnya are kidnapped off the street and married to men they may have never met. 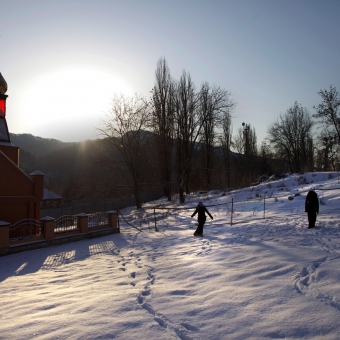 Chechen girls make their way to the mosque in the mountain village of Serzhen-Yurt, Chechnya. 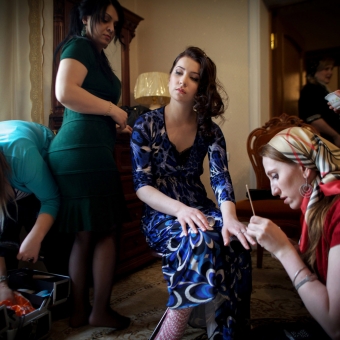 Layusa Ibragimova, 15, has her hair and nails done before her wedding. Her marriage to 19-year-old Ibragim Isaev was finalized by her father just weeks before. 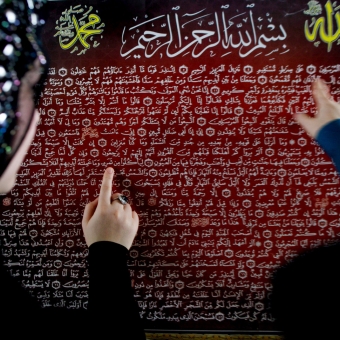 Young girls study Islamic scripture at an underground medrese in a rural village in Chechnya. 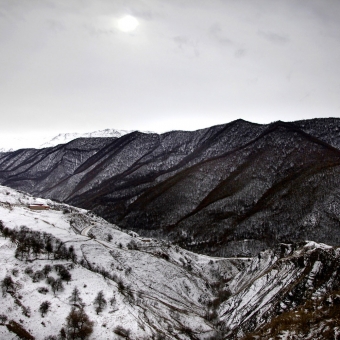 The mountain region of Itum-Kale. The district was a base for rebels during both Chechen wars. 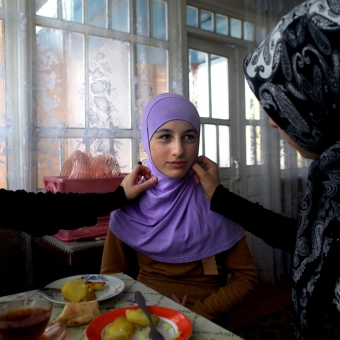 Seda Makhagieva, 15, sits beside her friends as they adjust her headcovering. The teen started wearing the head covering a year ago - despite her family's disapproval. 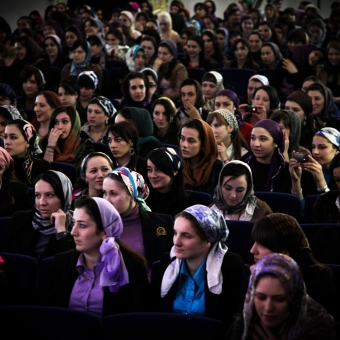 Chechen girls at a lecture hall in downtown Grozny. 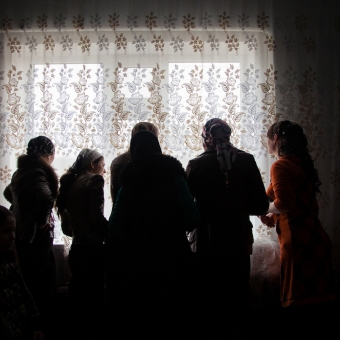 Chechen girls wait to be picked up for a party in the village of Achkoy-Martan. 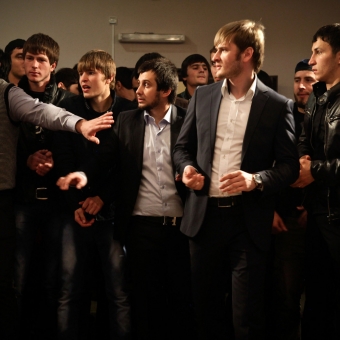 A group of Chechen men at a party, standing at the opposite end of a room from the women. In Chechnya, under strongman Ramzan Kadyrov, leader of the republic, gender segregation is being enforced. 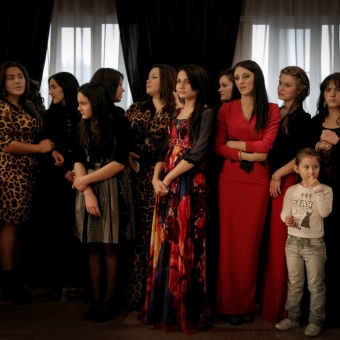 A group of Chechen women standing at the opposite end of a room from the men. In Chechnya, under strongman Ramzan Kadyrov’s regime, gender segregation is being enforced. 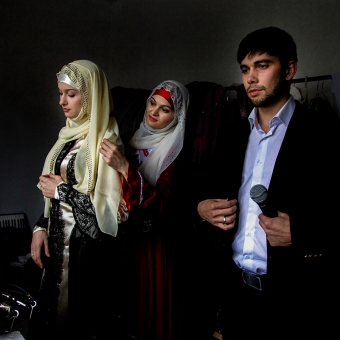 Chechen artists backstage before their performance. All women in Chechnya must wear headscarves in public schools and state buildings. Celebrities were among thefirst to conform, making the head cover a fashion statement. 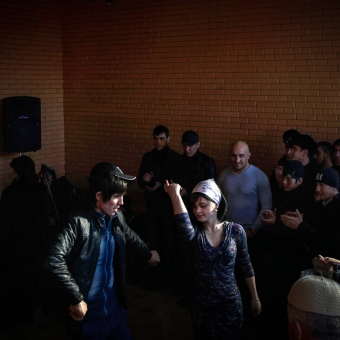 Party guests cheer as a couple dances Lezginka, a traditional dance performed in the North Caucasus. 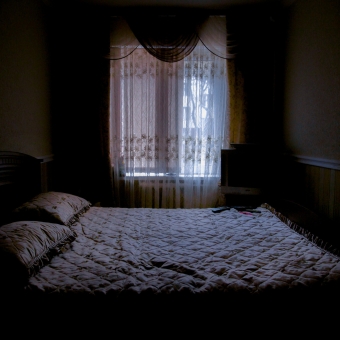 An empty bedroom which Elina Aleroyeva once shared with her husband. Aleroyeva, 25, says her husband was at work when security forces kidnapped her husband on May 9, 2011- accusing him of being a militant. Disappearances used to be a signature abuse in both Chechen wars and continue to take place. 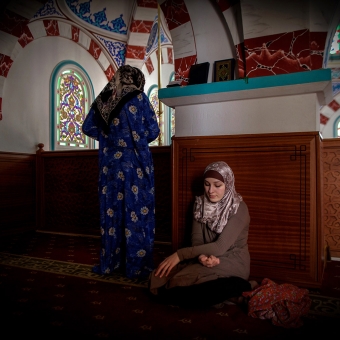 A woman prays at a local mosque in downtown Grozny. 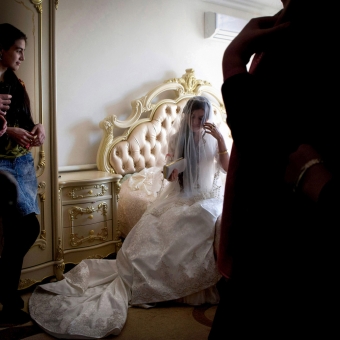 Jamila Idalova, 16, on her wedding day. The teen bride was kidnapped by her boyfriend. Idalova's family eventually approved the marriage. Bridal kidnappings are outlawed under the regime of Ramzan Kadyrov. 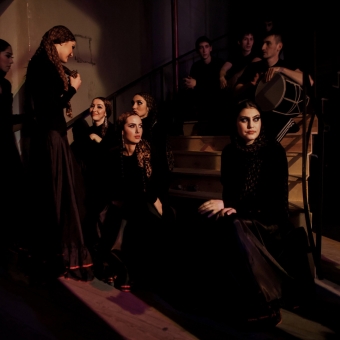 Chechen dancers backstage at a concert hall in the Chechen capital, Grozny. A suicide bomb exploded in front of the concert hall in 2009, killing six people and wounding several others. 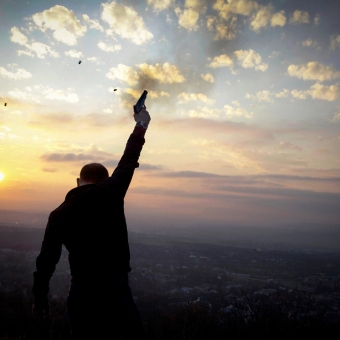 At sunset on the outskirts of Grozny, Kazbek Mutsaev, 29, fires celebratory gun shots as part of an age-old wedding tradition in Chechnya.

"Goodbye My Chechnya" documents the unraveling of the lives of young Muslim girls who came of age in the aftermath of an almost two-decade-long armed conflict.

The violence of Russia's North Caucasus gained a worldwide audience once again due to the Boston Marathon bombings in 2013. It is a region with a complicated history of deportation, violence, suppression and decades of war – but one aspect that is often overlooked is how this violence affects women.

Women in Chechnya have few rights. The Chechen president himself publicly announced that women are "the property of their husbands" and that their main role is to bear children. Few finish school or work outside the home. Chechen youth are quick to use marriage as their gateway to independence, sexual activity, and societal respect. In today’s Chechnya, where alcohol is all but banned, where polygamy is encouraged and where single-sex salons and gyms are becoming the norm, Chechen girls have been silenced.

I have already documented the stories of the region’s girls with images that I hope reveal a more intimate perspective on the personal lives and choices of young girls who witnessed the horrors of two wars, and as a result, lost their childhood along the way. The few girls who dare to rebel become targets in the eyes of authorities. I have met young Muslim girls whose lives have been threatened for some of the most innocent acts, like smoking a cigarette or holding their boyfriend’s hand.

These girls tell a forbidden tale of a different kind of Chechnya - one that is behind closed doors. I want to continue to tell this story through the women of Russia's North Caucasus, where a guerrilla war by Islamic fundamentalist rages on in republics of Chechnya, Dagestan and Ingushetia. The region is a source of unique terrorism: the female suicide bomber, including 22-year-old Khava Baraeva, who gained notoriety as the first female suicide bomber in 2000, when she drove a truck packed with explosives into a Russia military base, killing three. In recent years, women have taken part in several attacks in Moscow, including the bombings of two passenger planes in 2004 that killed 89 people and a 2010 bombing carried out by two women which killed 40 people and injured more than a hundred.

Experts estimate that up to 40 percent of suicide bombings originating in the region are perpetrated by women. These women have come to be known in Russia as 'Black Widows,' a name that plays on their alleged desire to avenge the death of their husbands (or relatives) at the hands of Russian security forces. I am interested in exploring this issue further. I would like to create a portrait series of what it means to be a Muslim woman amid the striking level of violence and bloody insurgency in Russia's North Caucasus.

These photographs are dedicated to those women who show strength every day in a region with little or no rights for women.

Diana Markosian has been deported from Azerbaijan, smuggled into Burma by a rebel army and detained by Chechen militias, all in the name of documenting a story. Along the way she has participated in the World Press Joop Swart Masterclass, received Burn Magazine's Emerging Photographer Fund and has been named one of PDN’s 30 Photographers to Watch. Her work is represented by Reportage by Getty Images and can be found in publications like the New York Times, Newsweek and Time.com.