A jointly created project about Grozny, inspired by Thornton Wilder who wrote about nine hidden cities in one in his book, “Theophilus North.” The photographers proposed work exploring specific aspects of Grozny’s aftermath through considering them as “cities” hidden within Grozny. 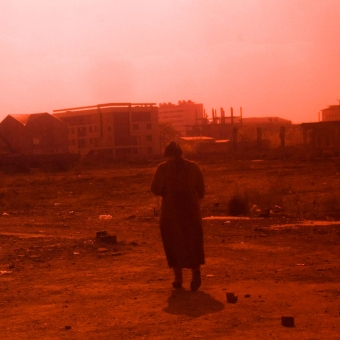 The market in the center of Grozny was the main meeting place before—and even during—the two wars in Chechnya. It will soon be displaced by skyscrapers and office buildings. The market will only remain as a memory. And so will the World War II comrades who used to live together in a multi-national Grozny; and the puppet theater and the historical cemetery, which no longer exist; and so will so many other sites—and friends— once dear to the people of Grozny. 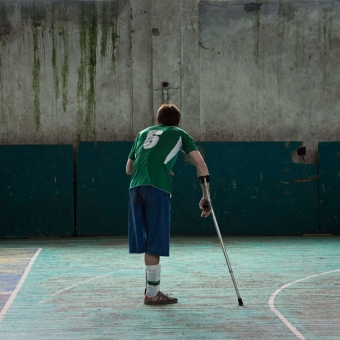 In 2009, Russia declared the conflict—which it called a “counter-terrorism operation”—to be over. But the war is not over for the people who still live in temporary housing facilities. It’s not over for professional soldiers who choose to be based in Chechnya, to earn higher wages for working in “a hostile environment” and for participating in anti-terrorist operations. 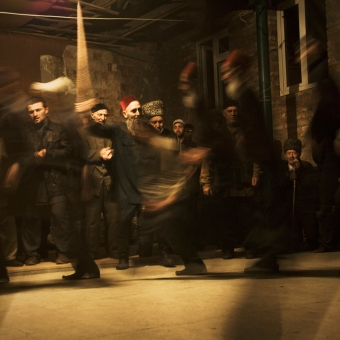 Dhikr is a Sufi practice, widespread in Chechnya. It is a religious practice full of vibrant energy, and its main tenet is the honoring of both God and those who have died. The night we photographed this ceremony, and talked to the imams there about peace, two terror attacks happened in the North Caucasus, one of them in Grozny. The relatives of one of the suicide bombers, who was 17 years old, publicly condemned his actions on TV. 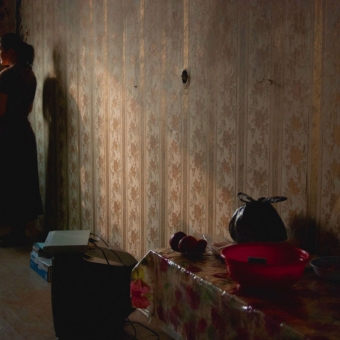 It is women, indeed, who keep life running in Chechnya. They have to deal with their evolving role in a post-conflict environment while caring for children, husbands and extended family. With the collapse of traditional values brought on by the wars, women must find their place in society once again—an identity which is still not the role of a Western woman, but which also is no longer the role of a traditional Islamic female. 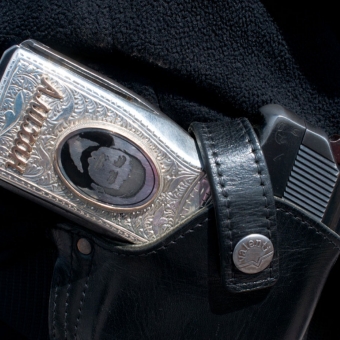 This man, a member of the security detail for Chechen president Ramzan Kadyrov, refused to allow his face to be photographed—but proudly showed his gun, which is engraved with his face and his name, Alikhan. In post-conflict Chechnya, having a gun is a symbol of power. At the same time, although few people have decent jobs, everyone strives to own a brand-new car, which is as important in contemporary Chechnya, as horses used to be in the past. 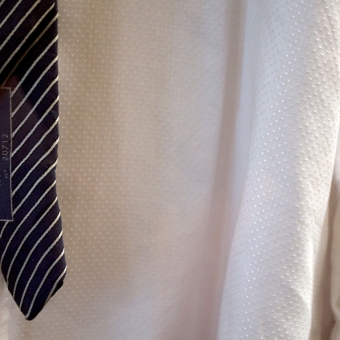 The best jobs are to be found in and around Kadyrov and his presidential operations. To be a so-called servant of the nation, to participate in the divvying up of the money that flows from Moscow. But for those who can’t land a coveted government job, it’s always possible to show your loyalty by putting on a t-shirt with a picture of the president, or by hanging his portrait in your kiosk. President Kadyrov himself also looks up to a higher person—Russian Prime Minister Vladimir Putin; a portrait of Putin hangs in his presidential office. 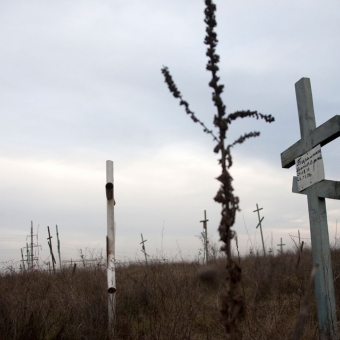 They are the people who do not belong. Even if they have lived in Grozny their entire lives, including this handful of Russians who make up the congregation of the Orthodox Church in the middle of town. Due to the security situation, these Christians cannot even hold an overnight Christmas service. Once multi-national, in today’s mono-ethnic Chechnya, a stranger is noticed immediately—even without the uniforms that identify the Russian soldiers still based in the area. 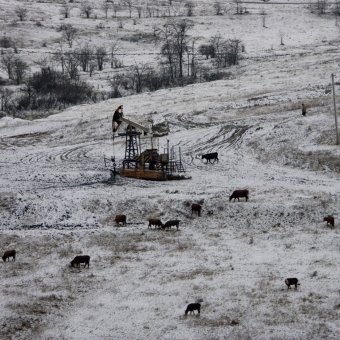 Cows surround Rosneft oil drills in the Staropromyslovsky district on the outskirts of Grozny. Many believe that Rosneft, Russia’s powerful oil monopoly, masterminded the end of the second war in Chechnya to gain access to the republic’s resources. Chechnya has a long history of oil drilling; it was the first region in the former Russian Empire to have oil wells built by the British at the end of the 19th century. 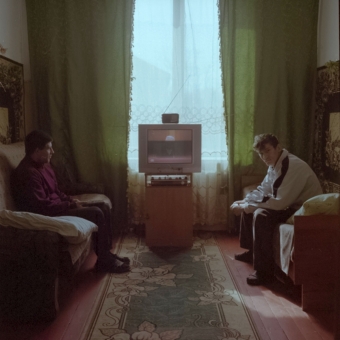 The passion for normalcy in Grozny is overwhelming. Even during the war, manicure parlors remained open; today, the beauty industry has skyrocketed. Even poor people arrange expensive weddings, which are at the core of life in Grozny. Still, it will take some time, as life continues to return to normal, before buying a wedding cake at a local bakery is a routine errand and not a major happening.
View the photo gallery
Photographer's Statement:

Take a walk down Putin Prospect, Grozny’s main street, with shining marble facades, look carefully at long-limbed Muslim women filing out of beauty salons, men riding in brand new SUVs, and you would never believe that this place was leveled by Russian aerial and artillery assaults less than a decade ago. Pause. Wait to celebrate peace, the reinvented life: inside, behind the freshly-painted, pale-pink walls, hate and despair still perform their sad dance. The ruined hopes and dreams—Chechnya’s wounds stay open like the deep puddles reflecting high skies outside the enormous central mosque. No fancy, newly-opened sushi bars, no propaganda posters portraying Chechen President Ramzan Kadyrov on every other building, can hide Grozny’s loneliness.

Layer by layer, the “Grozny: Nine Cities” documentary project peels the veil off for you to uncover what is really going on in the complex life of the Chechen capital. Inspired by Thornton Wilder’s novel “Theophilus North,” about many cities in one, the authors display various hidden and yet core aspects of human life in post-war Grozny, the city built on top of the mass graves of two bloody wars. The project’s nine themes (or nine cities) devoted to the nation that for centuries tried to break free from Moscow’s control, penetrate the unstoppable efforts that Chechens undertake in search of their own way to happiness.

The City of Memory reflects the unfading history of nearly 300,000 human lives destroyed by the two recent wars. Moscow vowed to win over Chechen civilians by rebuilding their devastated society, but seemed mainly interested in Chechen loyalty to the Kremlin and in plundering the natural reserves of the City of Oil.

The City of War shows that Grozny, which translates as fearsome, has never stopped breathing wars, the violence finding new targets. With Russian tanks gone from its streets, Russian nationals are isolated in the City of Strangers. Chechen suicide bombers attacking Chechen public places, Chechen police detaining Chechen civilians for being involved with the radical Islamic underground tear apart the City of War.

Dealing with violence, as with rain and snow, the city tries on its Sufi identity: new mosques, new Sharia laws emerge in every block of the City of Religion, its streets being renamed after Sufi sheiks. Uncovered women’s heads, even on street advertisements, must be shameful for Chechen men, as local television appeals to the City of Men. Men proud of their black BMWs, assault rifles and pointy, black shoes ban the appearance of unveiled women in public places. The City of Women, as a symphony devoted to beauty, features the most attractive face of Grozny.

With more authority wired from Moscow, Chechen President Ramzan Kadyrov, a former rebel fighter famous for silencing whistle blowers, creates the City of Servants with overwhelming armies of his fans, stadiums full of people chanting his name and Ramzan News TV chronicles covering his daily routine. The idolizing of one leader has never been a traditional concept for Chechen society. Historically, many Chechen clans constructed stone towers on their own land, a symbol of stable defense and self-confidence. In today’s City of Normality, men and women exhausted by more than fifteen years of vile fighting and self-destruction cover floors in their new brick homes with thick, brightly-colored carpets, throw feasts and dance their feet off at crowded weddings in their most beautiful clothes, grabbing the chance to enjoy the happy moments before more troubles roll into their fearsome city.

Text by Anna Nemtsova, a Moscow correspondent for Newsweek and the Daily Beast.

One of the finalists of “Feminine Vision of the Reality’ contest in Belarus.

Is working for Russian Reporter, Russian Newsweek, Reuters, among others.

Top-10 winner of the 3 competitions “Young photographers of Russia”, twice winner of Silver Camera competition about Moscow, winner of the competition Without Barriers devoted to disabled people, Moscow. Author of photoprojects “Kenozero”, “Toilers of the sea”, “Life with Parkinson disease”.

Part of several group exhibitions in Russia and Norway