A look at how Guatemala’s 36-year-long armed conflict has evolved into another kind of violence: Guatemala has the highest homicide rate in the world. The same social inequalities that fueled civil war have also helped create a generation of young people who have turned to the Maras, and gang life, after the peace accords that ended the conflict did not bring them any hope for a better future. 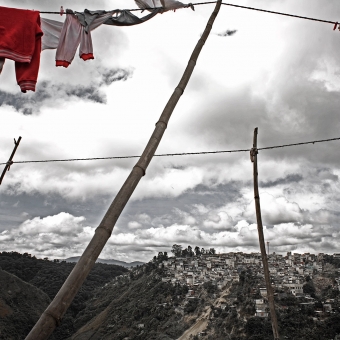 There are more than 250 “asentamientos” (slums) in the capital of Guatemala. These “red zones” are the poorest and most dangerous in the city because it is in these areas that gangs have grown up. 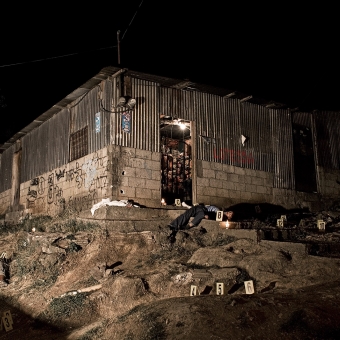 Guatemala City. Scene of crime. Two men driving a motorcycle shot dead four young men in front of a shop. According to preliminary investigations, the shooting was a settling of accounts between thieves. The case was closed, and pursued no further, as are nearly 99 percent of cases in Guatemala. This country is now considered the second most dangerous in the world. In 2011 nearly 6,500 homicides were committed here. 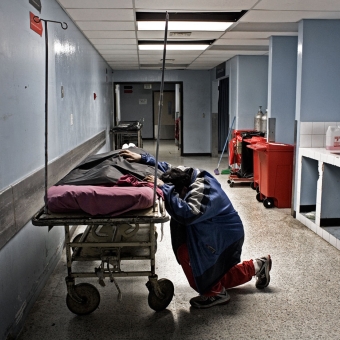 Guatemala City. Santiago, 15, was taken to the emergency room after being shot. He succumbed to his injuries and died on arrival at the hospital in the arms of his father. Reportedly a member of a mara, he was the victim of a rival gang. 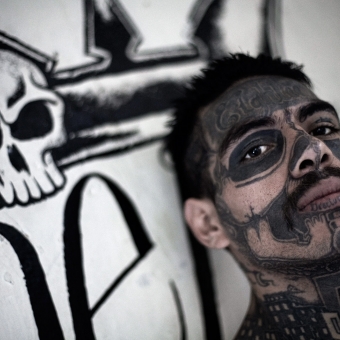 Prison “El Preventivo,” Guatemala City. Sector 11 was formerly known as death row because for many years prisoners sentenced to death were confined here. Today, members of “Barrio 18,” the most notorious gang in the country, are imprisoned here. “Smurf,” 24, was arrested for a series of murders, and has been sentenced to 181 years in prison. 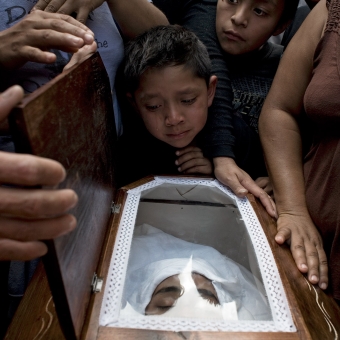 Cemetery, Guatemala City. Marco Antonio, 7, at the funeral of his sister, Laura, 14, who was abducted by men in a car with no license plate. She was shot dead at point blank range in the middle of a football field. Witnesses said they heard Laura begging to be spared, and then heard three shots ring out. No charges were brought. Three months before, her father had been assassinated by gang members. 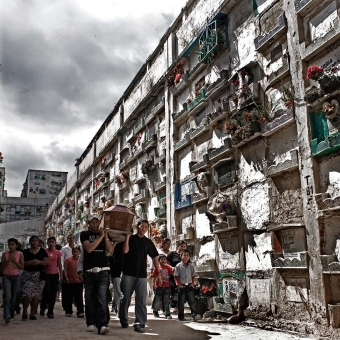 Guatemala City, cemetery. Funeral of Laura, 14, who was abducted by men in a car with no license plate. 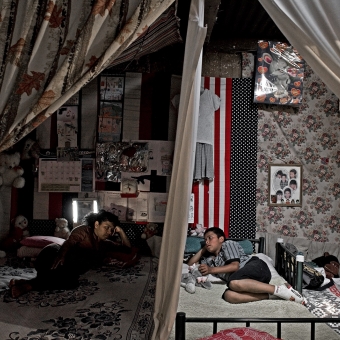 Marina G. has suffered physical, sexual and mental abuse, first by her parents and then by her husband. Her new partner, and the father of her third child, feels genuine affection for her. But Marina is unable to express any warmth towards her eldest son, Jordi, aged 13, who, in despair, has run away again and again, and is now an easy prey for gangs. 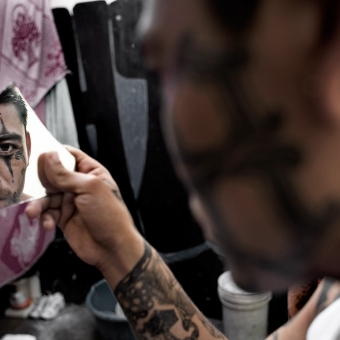 Prison “El Preventivo”, Guatemala City, Sector 11, formerly known as the death row, because for many years the prisoners sentenced to death were confined there. Today the members of the “Barrio 18”, the most important gang in the country, are crowded in this place. El “Gato” (the Cat), 23, was convicted of murder. Like most of his companions, the abuse and violence he suffered on a daily basis at home caused him, as a young teenager at the time, to join a gang in search of a “family”. 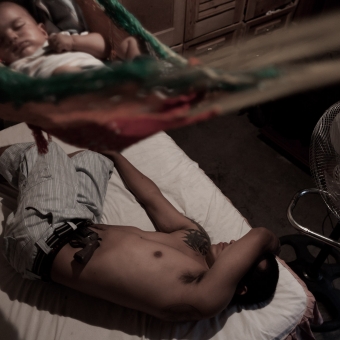 Ubaldo, 21, has recently become a father. A gang member since the age of 11, he decided to leave the gang after eight years, which included several stays in the hospital and in the prison for minors. Today he attempts to somehow reintegrate into society. But between occasional low-paying jobs, he sometimes accepts work as a “sicario” (contract killer) to help his family get by. 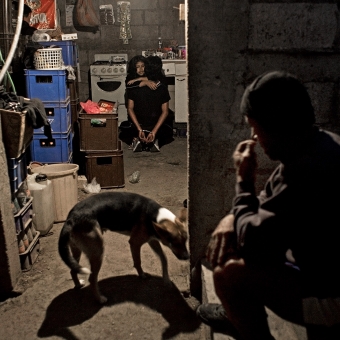 Guatemala City, 6 a.m. Jose Antonio, “El Chino,” (The Chinese), 19, a gang member was captured at his home in front of his father and his 16-year-old girlfriend, who was seven months pregnant at the time. She was murdered a few weeks later, before giving birth to her baby. Jose Antonio was wanted for at least five murders. 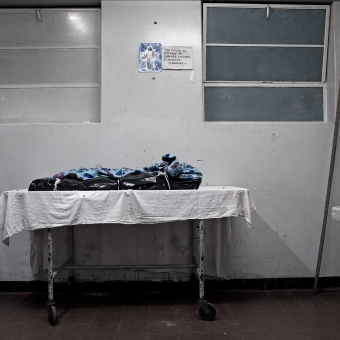 General Hospital morgue. Miguel P. was beaten by his stepfather and died of internal hemorrhaging, at the age of three. Abuse within families is extremely common, and is one of the main reasons that many young people join gangs. 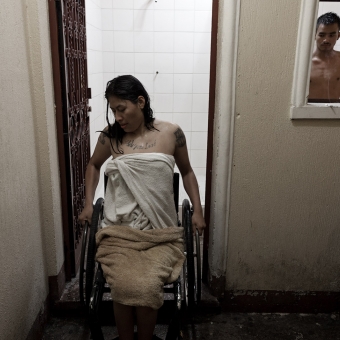 Alma was 14 when she first joined a gang. When she was 22 and seven months pregnant, she lost her baby after being struck by her boyfriend and decided to leave the gang. Two “homies” from her gang retaliated by trying to murder her. She survived, but is now a paraplegic. She lives hidden, far from her old neighborhood, with her companion, an ex-member of the same gang. 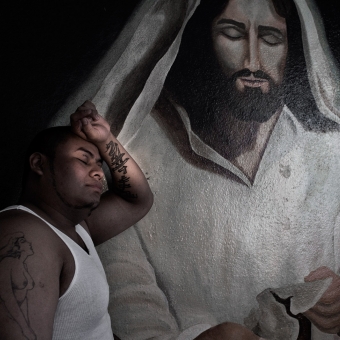 This rehabilitation center is owned by an ex-Guatemalan “marero” (gang member) from Los Angeles. He was deported from the US a few years ago and has become an evangelical Christian. Mario, 25, is a gang member. This is the third time he has been sent to this center because of his drug addiction problems.
View the photo gallery
Photographer's Statement:

The dream of a Guatemala in peace, after suffering 36 years of armed conflict, has changed into a real nightmare. The violence of the civil war has change into ‘another war’. This small country of 14 million inhabitants has one of the highest homicide rate and became the second most dangerous country in the world, with already over 6000 homicides this year alone.

The social inequalities that provoked in the 1980s the genocide of the army against the Mayan population in itself were the cause of the birth of the “maras”. These are youngster, victims of poverty, racism, exploitation, lack of justice and decomposed families. They don’t have any hope of a better future, and they searched through the membership with the gangs a response to this insupportable situation.

At the end of the 1970s, and beginning of the 1980s, thousands of Guatemalans, migrated to the capital to escape the massacres perpetrated by the army, to install themselves in the shantytowns. Without jobs, many of them finally choose to take their changes in the United States, mainly in Los Angeles, a process that provoked an even larger disintegra- tion of families. At the same time, the IMF imposed an extremely aggressive neo-liberal policy in the entire Latin Amer- ican region, which was dominated by military regimes. This further weakened a further impoverishing of the most weakened.

After the peace accords, the US ‘deported’ thousands of illegal youngster to their country of origin. Even if they had been born in the USA. Many of them had criminal charges against them and were gang members. Back in a country ruined and destroyed by years of civil war, with institutionalized corruption, a non-existent judicial system, an extreme poverty, without work, they organized themselves again as gangs, following the image of those in LA, physically elim- inating the adversary gangs in order to control a street or area.
The phenomenon of the Maras is without doubt one of the most visible and most dramatic consequences of the armed conflict in Guatemala. The media and the government present systematically the members of the gangs as the worst expressions of delinquency and the absolute of moral decadence. They dramatize the phenomenon to convey the idea to the population that the Maras are responsible for all the problems of the country, and that a social ‘clean-up’ is nec- essary in order to ‘eradicate’ the problem. But the Maras are only the rotten fruit of a society corrupted by a culture of violence. The State does not try at any point to analyze the roots of the problem and finds itself therefore incapable to propose social solutions with the goal to eradicate the origin of the problem. Its only response is again, a political repression, provoking even more violence.

Those young “mareros” look there for another family, or solidarity, friendship, tenderness, tenderness, respect, often felt for the first time, just as much a response to that unbearable social situation, like a challenge launched at that society that denies them every possibility of integration.

These Maras have formed themselves in reaction to other forms of violence, that they underwent and practiced, daily, on family level (sexual abuse, humiliation, lack of love and attention) on a social level (violence against women, defi- cient public health, no access to education, malnutrition), economical violence (extreme poverty, endemic unemploy- ment, unfair payment) political (corruption, injustice, institutionalized discrimination), cultural (against the mayas). Since their youngest years, children are subjected to all these forms of violence, and after several years the violence becomes commonplace and becomes their only way of self-expression. They do not idealize their choice of life, but it is important for them to feel they are alive through dangerous circumstances, more than to be ‘nothing’ or ‘nobody’.