Sahel: The Dynamics of Dust

Sahel – The Dynamics of Dust is a visual study of the social structures of rebel movements in the Sahel region, and the new relationships the local population has forged with a territory they can no longer pass through freely or safely. 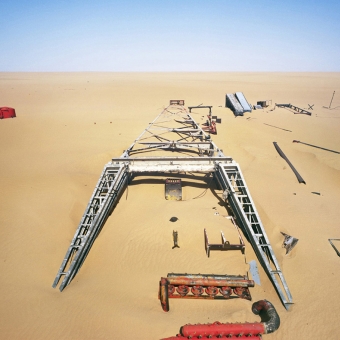 Texaco drilling station abandoned in the 1960s because oil deposits were too deep in the ground. 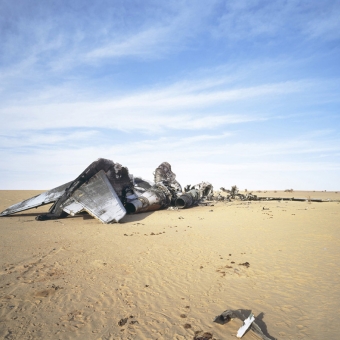 A Boeing 727 cargo plane, thought to have been carrying a large amount of cocaine, torched by drug traffickers after they had emptied it. The plane landed on an improvised airstrip in the middle of the Malian desert. In Bamako the population called it "Air Cocaïne.” 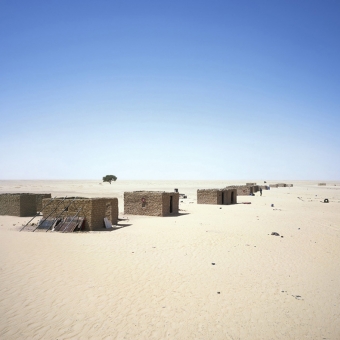 With no name on the map, this area is mostly used to hide petrol for smugglers en route to Algeria or Libya. 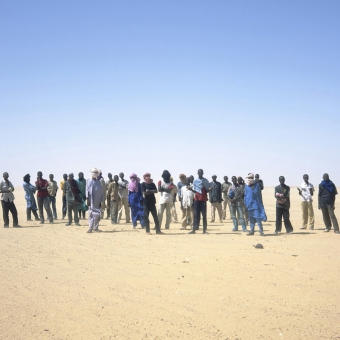 Thirty-two smugglers waiting, in the middle of nowhere, for trucks to pick them up and continue on their journey to Libya.  A few days earlier, their vehicles broke down in the desert, 15 kilometers from the nearest well, and they had to walk. 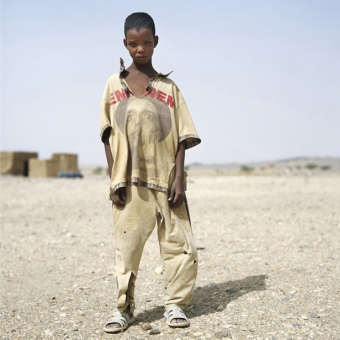 Ahmed, nine years old, is the son of a local gasoline smuggler. 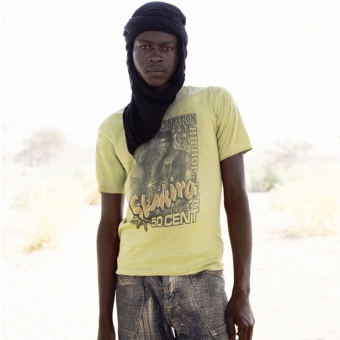 A young rebel recruit. Alhadsi claims to be twenty-three. He walked for eight days and more than 200 kilometers from his village, Dabaga, to join the "Nigerien Movement for Justice" mobile camp in the Sulufiet area. 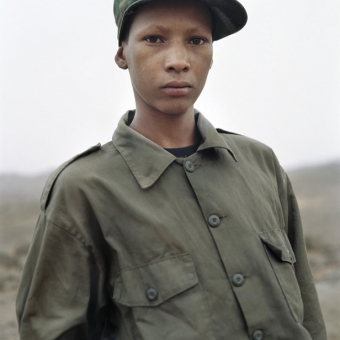 Fourteen-year-old Mohamed Ag Tarrassa is Commandant Sidi Mohamed's aide de camp. He joined the rebels of the Democratic Alliance for Change in April 2008, following in the footsteps of his older brother Ahmed. 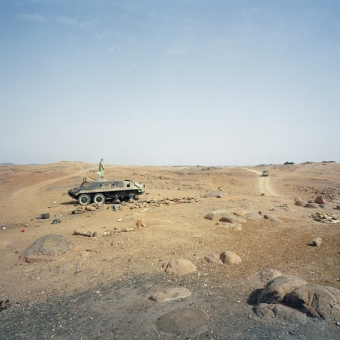 Tin-Za-Ouaten, Northern Mali. A view of the battlefield, where the Malian army fought Tuareg rebels from the National Movement for the Liberation of Azawad (MNLA), at the border between Algeria and Mali. It is now under the control of MNLA rebels. 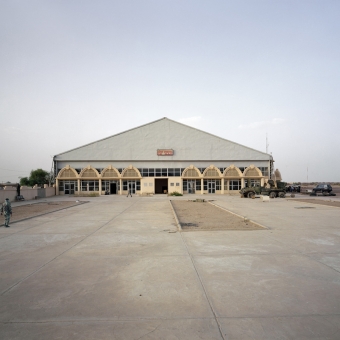 Gao’s international airport,  under the control of MNLA rebels few days before fighters from the al Qaeda-linked Movement for Tawhid and Jihad in West Africa (MUJAO) pushed them out of the city. 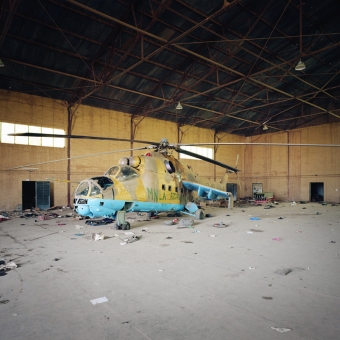 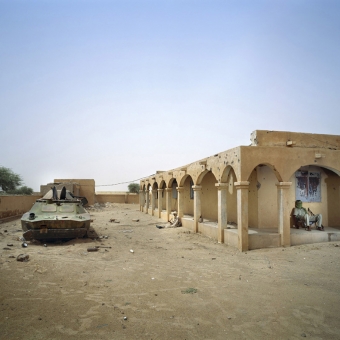 The Malian military base of Abeïbara, which was attacked by the "Democratic Alliance for Change" on May 21, 2008,  and remains under the control of Tuareg rebels. The rebels killed 33 Malian soldiers and took 73 prisoners. 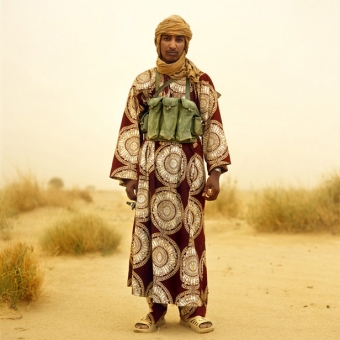 Twenty-year-old Sale Ag Moussa is a member of the Tuareg rebel group, "Democratic Alliance for Change.” 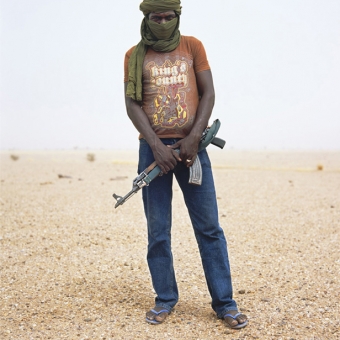 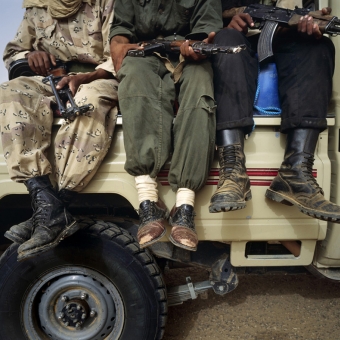 Three Tuareg rebels on the move in their pick-up truck. 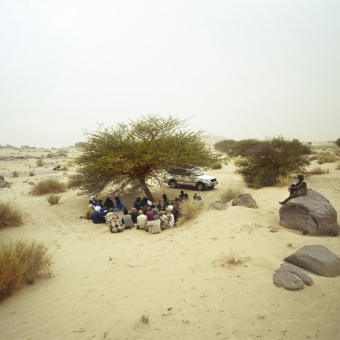 High commanders of the Tuareg rebels meet to discuss a peace deal negoiated with the Malian government with the diplomatic support of Algeria. They voted to refuse the deal and hold out for a better offer that would include the integration of the rebels into the Malian army. 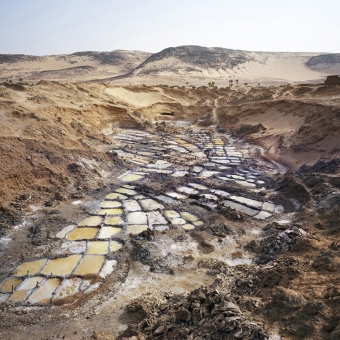 The salt mine of Fachi, a former tourist paradise. Like ninety percent of Niger, this area is off-limits to foreigners due to the risks of kidnapping by al Qaeda-affiliated groups in Islamic Maghreb. 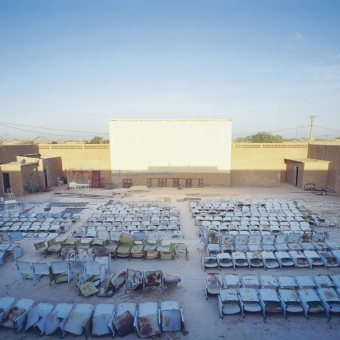 An abandoned theater in Agadez. 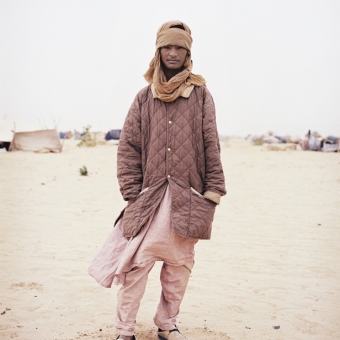 Fifteen-year-old Assaleh fled Tombouctou city in Northern Mali in mid-January, 2012, to take refuge in the Fassalah refugee camp in Mauritania. Over 250,000 people have fled to Niger, Mauritania, Algeria, and Burkina Faso since the outbreak of fighting between Tuareg rebels, jihadist groups, and government troops in northern Mali. 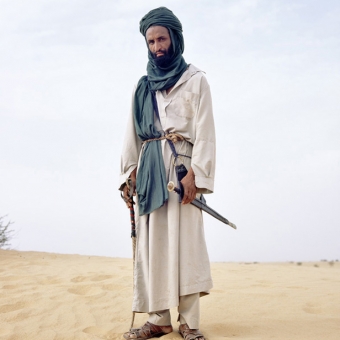 Ahmada, a Touareg nomad, is working as a camel shepherd, watching more than 200 animals, day and night. 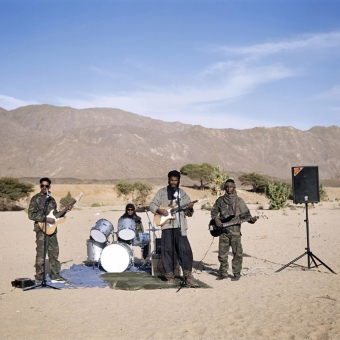 Bibi, Al Hussein, Mohamed and Akli (from left to right), are part of a Touareg rebels’ band, started by the Nigerien Movement for Justice to spread their message through music across the Sahel Region. In the 1990s, as the first rebellion took place, a band with a similar mission was created and became famous in Europe.

My particular interest in the Sahel region, where I have been working since 2008, grows from my earlier, and still ongoing, visual studies focused on the social structures of rebel movements.

Historically, the autochthonous Saharan inhabitants, which includes the Tuareg, Peuls, Songhaï and Maures, have always passed freely through the Sahara. For decades, perceived as “exotic” peoples with an ancient history, these inhabitants led thousands upon thousands of Western tourists into archetypal and idealized desert landscapes, which resonate with Western romantic longings about the region. The same areas were also famed part of the Dakar Rally route until 2007.

But with recent rise of an “abduction” industry, the game has changed, and this former dream destination has turned into an often deadly nightmare for Westerners.

At first glance, the rise of Islamic terrorism in this area is to blame. It is said to have transformed the balance of the Sahara, but a closer look reveals a reality that is much more complex. The region today must cope with a dangerous cocktail of underdevelopment, poverty and state failure. In this new landscape, the local population is confronted with armed Jihadist and Salafist groups, human traffickers, drugs and weapons smugglers, topped off by international interests jockeying to win oil prospecting and uranium mining rights.

Today, almost all of Mali, Niger, Mauritania, southern Algeria, and Libya has become a new Red Zone. My goal is to document the new relationships that the local population in the Sahelo–Saharan band has forged with a territory they can no longer pass through freely or safely. As a former tourist paradise now off-limits to foreigners, the dire economic situation has been made even worse by the fact that a large part of the population has been cut off from tourist dollars that were essential to the incomes of many.

The lack of a political vision for the area’s future as well as failing state policies make up for a scenario in which a doomed generation is growing up, especially when considering that the population of the Sahel region is predicted to double by 2040.

Dudouit graduated from the Vevey School of Photography in Switzerland in 2000. In 2004 was the recipient of the KieferHablitzel Art Award and in 2005 he was invited to participate in the World Press Photo Master Class.

In 2011 his work in progress Sahel – The Dynamics of Dust received a Swiss Design Award by the Swiss Cultural Office and in 2013 the support of the Magnum Emergency Fund grant.

He is represented by East Wing in Dubaï and Doha, his work is part of the collection of the Liner Appenzel Museum and Museum of Fine Arts of Houston.