The Time in Between

The Time in Between: 9645 Kilometers Memory

Helena Schaetzle's ongoing project addresses the personal relationship shared by many Europeans to World War II and to the ways collective memory shapes history and politics. She proposed continuing her work by exploring the seven regions where her grandfather served as a soldier during WWII, using his personal diary as a guide. 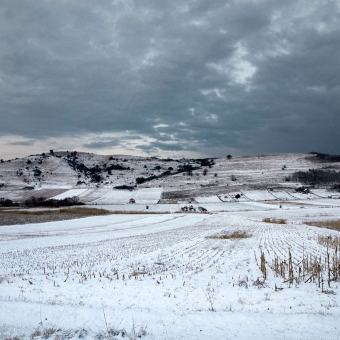 Kiev / Ukraine Ludwig Osswald Transportation with Russian livestock wagons towards the frontline Muntjan G. Ivanovich “I didn‘t know that the war would be so horrible. I didn‘t think about my future. I only said one thing. I said “This is my address, if I get killed, please, tell my mum”. 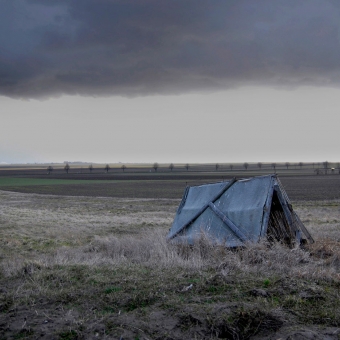 Donezk / Ukraine Ludwig Osswald Training behind the frontline Eliza I. Makarenko “I was 12 years old. In the middle of the night the police came and took us to the train station. They beat up the people who refused to leave their houses. We went to Zaporozhye by train, where my brother died. Then they sorted us according to our nationalities. Even though we were Russians of German origin, they took us to a camp. It was horrible. We saw how they buried people alive.” 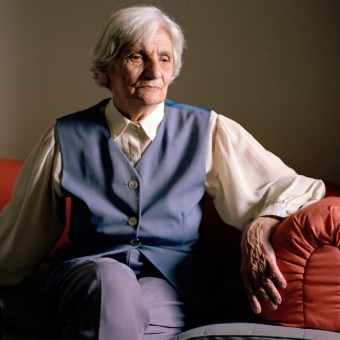 Sloviansk / Ukraine Ludwig Osswald “It was my first battle as a soldier. At 3 o’clock the combat started, at 6 o’clock half of them were either dead or wounded.” Raya L. Lischenko “I was very little, about 5 years old, but I remember everything. The Germans burned down every second house. First they were searching for men to kill. Later they started killing everybody. Women and children. A German soldier threw an artillery shell into the bunker where my grandmother was hiding. My grandfather’s place was also burned down. When he left the house to extinguish the fire, the German soldiers killed him, too. His body was burned along with the house.” 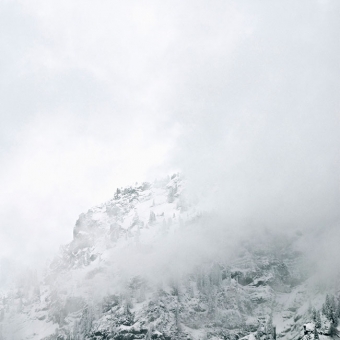 Novocherkassk / Russia Ludwig Osswald Advance towards Kuban. Kukoz F. Ivanovitsch “I once met a German soldier. He was an old man whose leg was injured very badly. He was laying on the floor and was saying: “Hitler kaput, Stalin kaput“. I thought that maybe he was hungry and gave him some bread. When he asked me to shoot him, I couldn't do it and left him.” 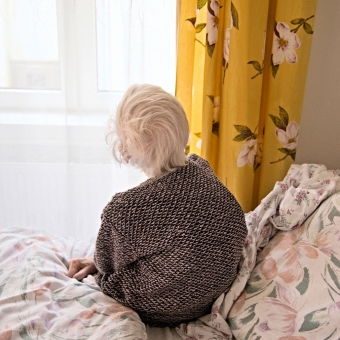 Rostov on Don / Russia Ludwig Osswald Advance towards Caucasus. Anna I. Kirilenko "I was 15 years old when I was brought to Germany. I was IN a long row of naked women. One can forget everything, but not the humiliation. Not that! They shaved our head and looked at everything, the hands, the fingers, the ears, everything as if we were horses. The women who were healthier had to work, the others were killed straight away. The whole night I was crying." 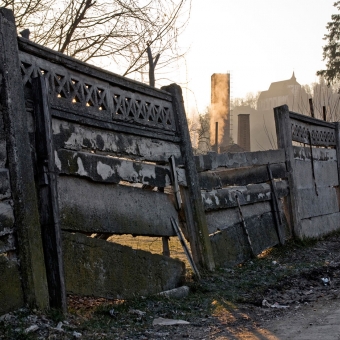 Near Slatki / Russia Ludwig Osswald Severe fighting in the Caucasian region. Yatsenko Zinaida “I was 5 years old during the occupation. There were local children and children who had been evacuated from Leningrad. In a short cut from my school to my home I saw small children from Leningrad being killed by German soldiers.” 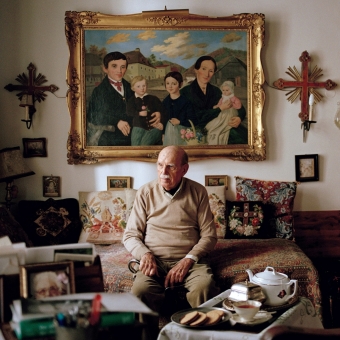 Sigishoara to Macea / Romania Ludwig Osswald “I was taken to the prisoner’s of war camp in Russia by train. On the way I got typhoid and dysentery and was left in Sigishoara. After I got better another imprisoned soldier asked me if I wanted to escape with him. We destroyed all our papers and went to the train station. Every day before dawn we would jump off and hide somewhere until the evening. We survived by going to remote houses, begging for food.” Martin Sandner “I know about a German imprisoned soldier who was hidden by a couple from St. Martin. They gave him civilian clothes and showed him where it was safe to cross the border. It was rare that someone succeeded. The border was well protected and many got shot during their attempt to escape.” 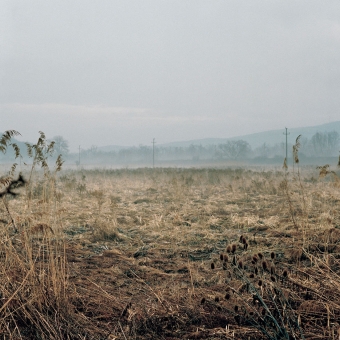 Near Ceske Budejovice / Czech Republic Ludwig Osswald Capture in a forest. Frantisek Skanta "On May 28, 1945 the German soldiers were fleeing the frontline. Five German soldiers with badges of honor came to our village. Two villagers who carried only wooden sticks imprisoned them and took them to a camp 20 kilometers away." 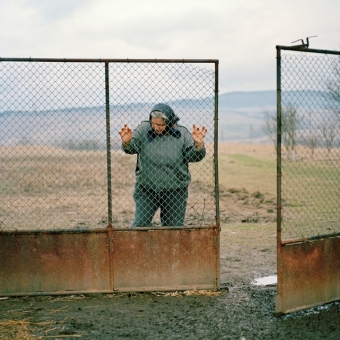 Near Zlata Korunia / Czech Republic Ludwig Osswald Rejection at the Russian—American zonal border Marie Lepsi “At this street everybody came past who tried to escape towards Germany. First the Hungarian soldiers who had fought for Germany came along. The Americans rejected them at the border and brought them back to the Russians. The Russians took all their jewelery and watches. Whatever they didn’t need, they stamped into the earth. Afterwards they shot the Hungarians. I could see that on my way home from the bus.” 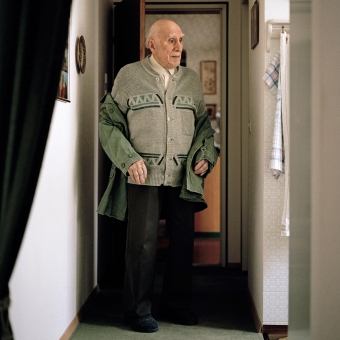 Vienna / Germany Ludwig Osswald Walk towards the prisoners camp for German soldiers. Anton Schimatzek “In the last camp where I was held, every morning I got a bucket and a shovel and had to go to the cesspits. They were as big as a room with beams laying across the top. Not one day passed without a body lying in there. Either dying or already dead and I arrived to put bleaching powder to disinfect on top. I was 24 years old and weighted 55 kilos.”
View the photo gallery
Photographer's Statement:

Almost every person in Europe has part of their family history connected to World War II happenings. With the dying out of the last living witnesses of this time, we are entering an age of forgetting and overcoming our past. This project does not just remind of that time and the remains still perceivable in today’s society but also close a circle of time with personal records and memories of still living witnesses in photographic and text form.

Until today experiences made during World War II influence the inhabitants of Europe. Out of an infinite number of sources, images of this time are saved in our memories. This collective memory takes effect in a historical but also in a political way as well as psychologically. By showing different experiences people had at the same time at the very same place, I hope to help to expand the historical awareness of my generation and give an impulse for a critical discussion.

In my work I put my focus on the part of the war taking place in the Soviet War Zone. The thread of this project is the personal diary of my grandfather who was a soldier during World War II in Germany, Austria, Hungary, Romania, Poland, Czechoslovakia, Ukraine and Russia.

Within these places I search for contemporary witnesses of the Second World War. Thus to record the different personal experiences ranging from recruitment, warfare, persecution of Jews and other minorities to everyday life within this uncertain time. This records appear in form of interviews and text in the project. The pictures speak about escape, chase, destruction and war. Pictures of the present which still reflect traces of the past, photographed as photo documentary in a narrative without a dominent voice but with space for own interpretations and thoughts. Pictures which might encourage to look into ones own family history.

Since 2011 Schaetzle's photography has been represented by the photo agency Laif. Schaetzle has freelance for numerous newspapers and magazines including Brand Eins, Taz, Spiegel-online, Stern.de, Handelsblatt, Impulse, and Südkurier, as well as NGOs including Seva Mandir, HLFPPT, Vanangana, and Mahila Vikas Samiti.