Bruce's goal is to provide a window into the everyday struggles and achievements of individuals. She seeks to show viewers how the people of Iraq are directly affected by the politics and movements taking place in the country. By providing personal stories that show the similarities of human spririt that cross the boundaries of culture, geography and religion, she hopes to create images that inspire empathy and understanding. 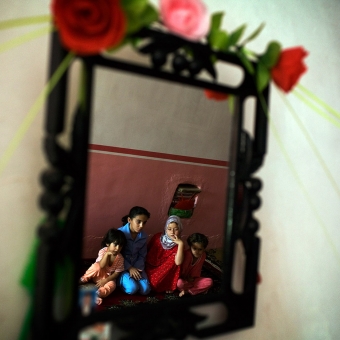 A group of girls gather at a home in Iraqi Kurdistan where they are told there is a party. In reality, their mothers have brought them to a midwife who will circumcise the girls. Female circumcision is a rite of passage for most girls in Kurdistan. It is meant to “cleanse” them of improper or sexual thoughts and actions. 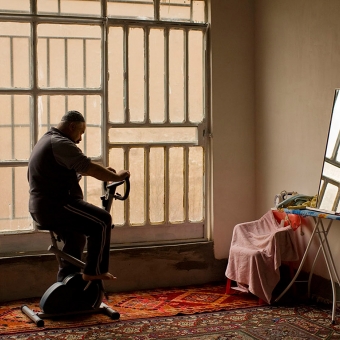 This Kurdish man in northern Iraq continues to pedal, looking straight ahead into a mirror propped on his wife's ironing board. He pedals and looks through the window at his land. Pedals and smells meat frying in the kitchen. Years ago, in a village now deserted after threats of violence, they had more, he says. These comforts—the bike, the orchard, his family—can disappear quickly in wartime. 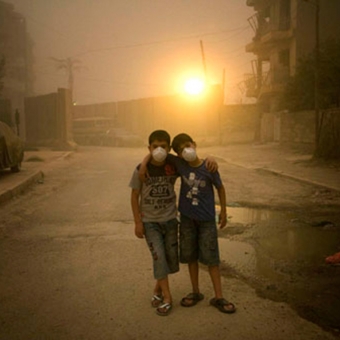 The dust smells like chalk. Heavy and still, the air is orange-tinted. Breathable until it hits your chest, causing a stuttering cough. In the Karrada neighborhood of Baghdad, Hussein Abbas, 10, and Zaid Alaa, 12, head to a pharmacy in surgical masks. At a maze-like checkpoint for cars, an Iraqi guard ruffles Zaid’s dust-grayed hair. From there, the boys can see an abandoned house with balconies torn like twisted metal combs. Three years ago, the windows in Hussein's home were shattered by the force of two suicide bombs that exploded, minutes apart, a few houses down the street from where he lives. 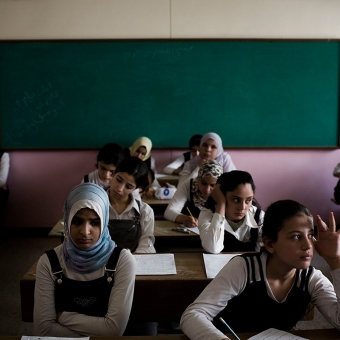 In Baghdad, the sounds of war seep through the closed windows. Two sirens wail. One pulses, stationary. The other fades. Black Hawks circle low, rattling the windows. Men are protesting on the main road about 200 yards away, chanting in a slow walk with banners and flags. On some days, the murmur of the air conditioner masks the sounds. But today, the first day of exams, there is no electricity. 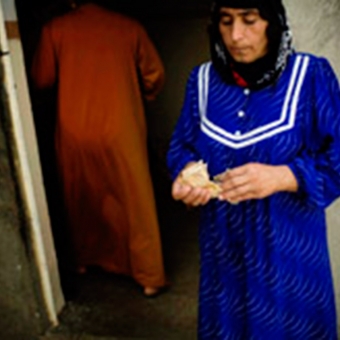 Maharoub Juwad Nawchas, a 40-year-old midwife from northern Iraq, has traditional Kurdish tattoos covering her chin. She learned the tradition of female circumcision from her mother, who performed the procedures for free. Nawchas now charges 4,000 Iraqi dinars, or just under $3.50, because her husband is disabled and can’t work. She has circumcised about 30 girls a year for the past two decades. 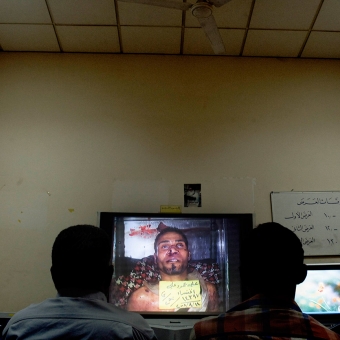 This room in Baghdad was opened in 2004 to help the morgue identify bodies arriving by the hundreds from all over Iraq. July 2007 was the deadliest month, with more than 2,000 victims. At that time, a line of wives, husbands, mothers and fathers waiting for their turn to identify the victims wound through the hallways. A white-haired man in the room scrutinizes the screens. A full year's worth of images, thousands of images, reflect in his thick glasses. Craning his neck, he squints and tilts his head and tries to recognize something familiar. A piece of clothing. A tattoo. Placing the memory of his son on every frame. 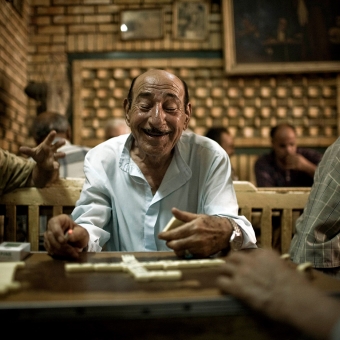 Hookah pipes bubble, the fragrant smoke competing with the harsh, unfiltered cigarette smoke from the other side of the room where men flip dominoes or softly move a rook into check in a game of chess in Baghdad. They play from midmorning to early evening, every day, to the sad, beautiful voice of Umm Kulthum. The cafe plays nothing else. 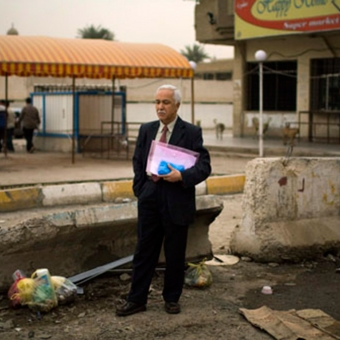 Peering through a break in the barrier wall, Qasim Ali waits for his ride on al-Mawal Street near Baghdad's Sadr City district. A minibus, one of many stuck in traffic, will take him and other government workers to the Ministry of Trade, where he has worked for 30 years. This is his Monday morning commute. The street is a sight, the atmosphere heavy with trash odors and car exhaust. Street dogs own the sidewalks, schoolchildren jump puddles of sewage to cross the busy street, and a donkey bays at his driver's sharp whip. But Qasim's eyes are closed. 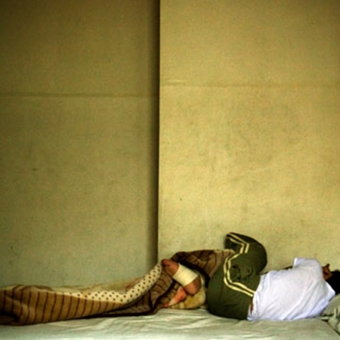 Omar, 9, sleeps in a hotel room he shares with his father at the Amman Palace in Jordan. He and about 50 other injured Iraqi children live in the hotel while receiving treatment from Doctors without Borders.
View the photo gallery
Photographer's Statement:

Although the war in Iraq is far from over, western newspapers are closing their Iraq bureaus and publishing fewer Iraq stories than during any other period of the war. Declining readership and advertising revenue are partly to blame. But in this period of relative peace, the story is also shifting from focus on the US military to stories of Iraqis rebuilding their lives and their own government—a topic that has lost the attention of many western readers.

This is unfortunate given that 2009 will likely be one of the most telling and decisive years for the future of Iraq as issues of sectarianism, governmental control, and US involvement are balanced and tried.

The war in Iraq is a story close to my heart, one that I have covered since 2003, and one that remains possibly the most important story of our generation. Regions of Iraq, long left uncovered by the western press due to the violence, are now open and relatively safe. Issues that were previously difficult to cover long-term are now possible to witness on an intimate level.

My goal is to provide a window into the everyday struggles and achievements of individuals and to show viewers how the people of Iraq are directly affected by the politics and movements taking place in the country. By providing personal stories that show the similarities of human spirit that cross the boundaries of culture, geography and religion, I hope to create images that inspire empathy and understanding.

Andrea Bruce is an Indiana native and an alumna of the University of North Carolina at Chapel Hill. After shooting as a staff photographer for The Concord Monitor and The St. Petersburg Times, she joined the staff of The Washington Post in 2001 where she began to chronicle the world's most troubled areas.

Bruce has won many awards for her work, including top honors from the National Pictures of the Year competition, the White House News Photographers Association (where she has been named Photographer of the Year three times), and the prestigious John Faber award from the Overseas Press Club in New York.