A landscape and archeological micro-photography project that examines the beaches of Normandy, which still contain particles of shrapnel from the 1944 D-Day invasion of German-occupied France during World War II. 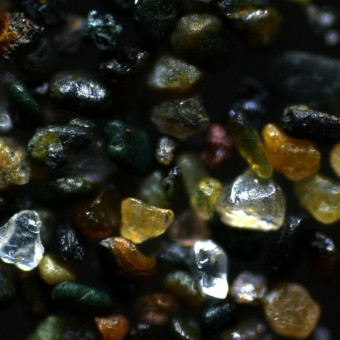 The majority of beaches are made up of two key ingredients, calcium (seashell) and silica (glass). On the five invasion beaches of Normandy, up to 8% of the sand is made up of war detritus from D-Day. 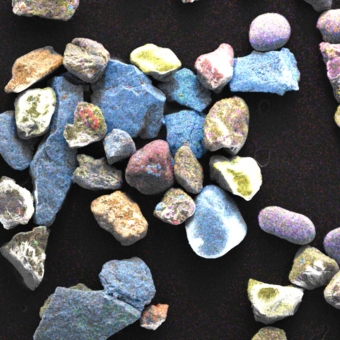 SEM (Scanning Electron Microscope) Imaging depicting the chemical composition of sand. Blue is iron (shrapnel), yellow is silica (glass, natural element of sand) and orange is calcium (sea shell). The divots and scars on the individual grains were formed from impacts with other particles when the steel had solidified, although whether this occurred in the air following the explosion is unclear. 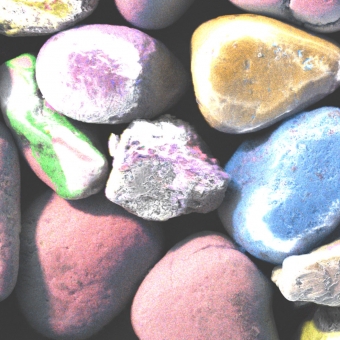 Individual grains of sand, seashell, iron, bone and shrapnel found amongst the beaches, imaged through a Scanning Electron Microscope (SEM). 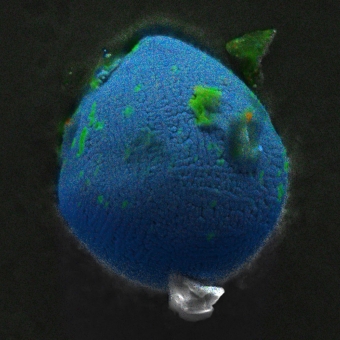 A piece of shrapnel. Shrapnel is formed when exploding iron creates liquid droplets that rapidly solidify. These particles were generated from the explosions of munitions during the D-Day landings. 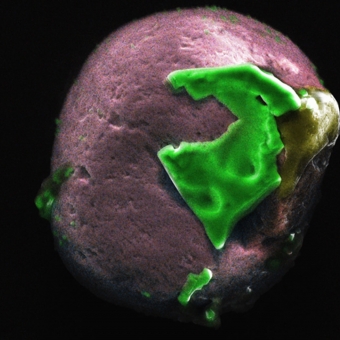 The small green pieces stuck to the microspherule is nickel-chromium stainless steel from a fragment of another broken D-day microspherule, formed during the explosion when particles were tumbling and collided in the air. 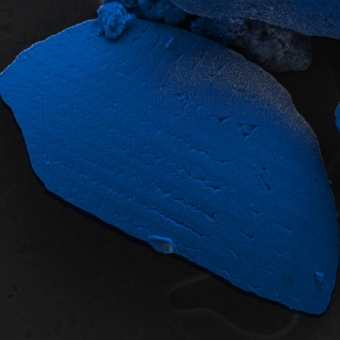 A section through a piece of shrapnel. The blue reveals its chemical composition. Solid blue gives us a definitive answer to its make-up. 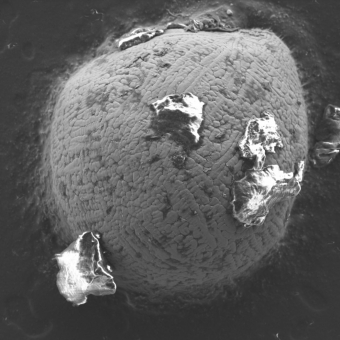 A piece of shrapnel. The divots and scars on the individual grains were formed from impacts with other particles when the steel had solidified, although whether this occurred in the air following the explosion is unclear. 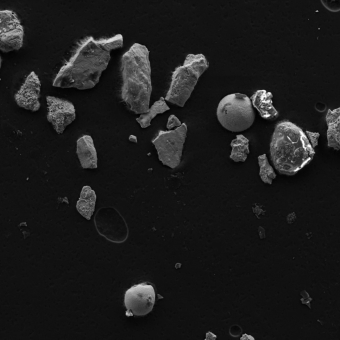 Individual grains of sand, seashell, iron, bone and shrapnel found amongst the beaches. Shrapnel displays a remarkable variety of shapes and degrees of roundness. 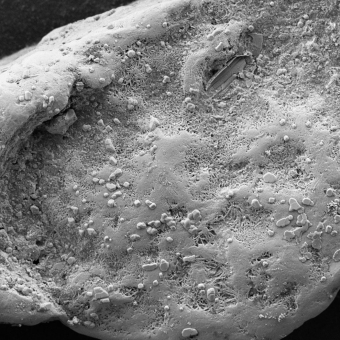 A Scanning Electron Microscope (SEM) magnifies the surface of a piece of shrapnel. The corrosion of shrapnel grains is the result of their deposition in seawater, a fluid that is optimally suited to corrode ferrous metals because of the availability of oxygen, salts, and microbes. 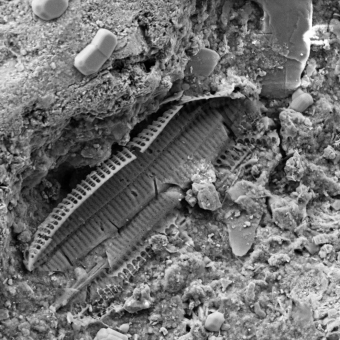 A diatom, a unique organism of the ocean, eats its way through a piece of shrapnel. Diatoms are essential to the life of the ocean. Paradoxically, they love iron and steel; as they eat they create algae, a significant life-force. Through death, they create life. 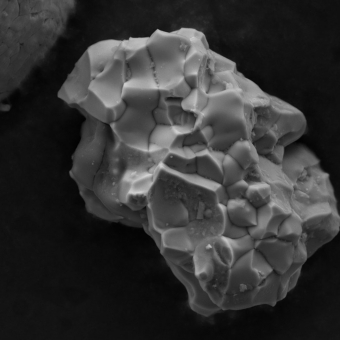 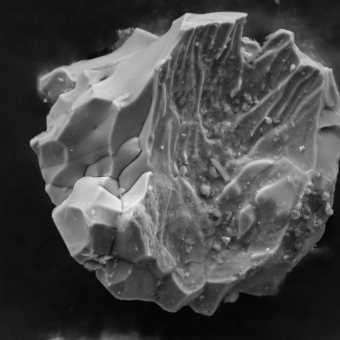 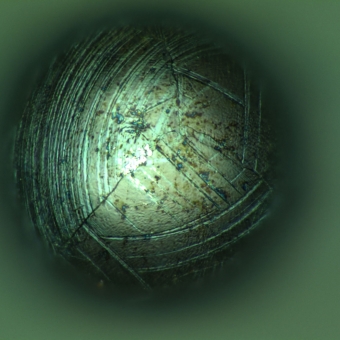 A shrapnel microspherule. It is likely that the scratches on the exterior of the steel grain was formed milliseconds after the explosion that generated them while the shrapnel was soft and undergoing turbulent rotation and impact with other particles. 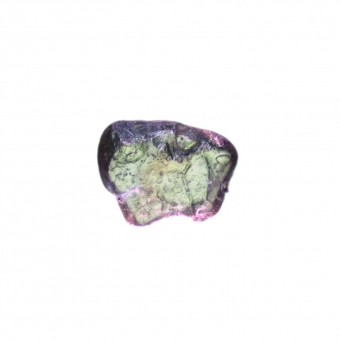 Shrapnel displays a remarkable variety of shapes and degrees of roundness. Nearly all grains retain their original non-spherical shapes, but all grains, even the most shardlike, have undergone some degree of rounding of sharp edges. 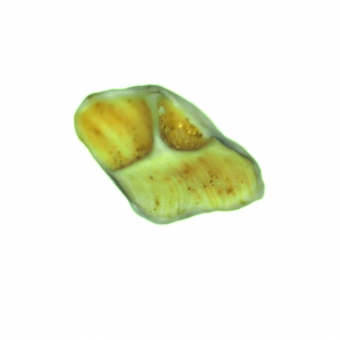 The corrosion of shrapnel grains is the result of their deposition in seawater, a fluid that is optimally suited to corrode ferrous metals because of the availability of oxygen, salts, and microbes. 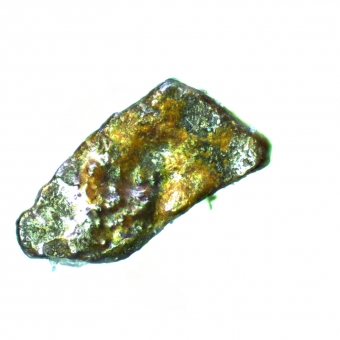 Grain impacts during wave action kept red/orange rust from forming except on protected parts of grains. Nevertheless, at least a thin film of oxidized iron, and generally a layer of corrosion, coats shrapnel and iron beads. 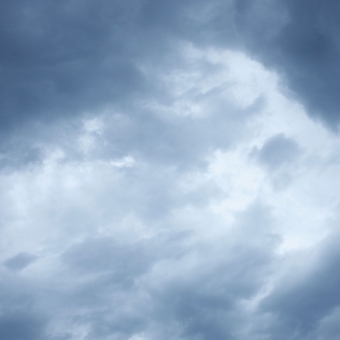 Clouds over Normandy. June 6, 1944 was a fortuitous day as the war planners originally wanted to launch the invasion earlier, but due to weather, were forced to launch on June 6. The next available date, June 27, 1944, proved to be one of France’s worst storms for decades. 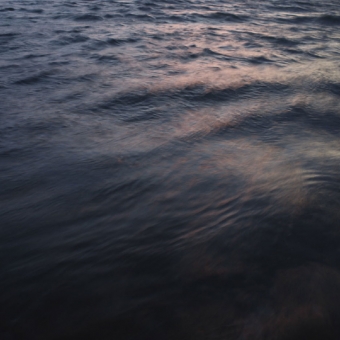 One of the main ingredients in the creation of sediment is the action of the waves, mixed with the heat of the sun. 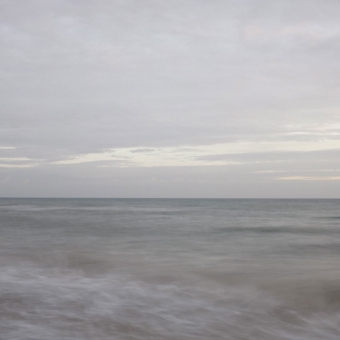 The seaside from Omaha Beach, one of the five D-Day beaches used in the invasion and scene of the most bloodiest battles. 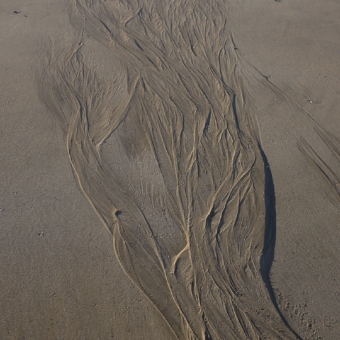 The sand of the invasion beaches is generally light gray, angular and finegrained, supplied to the coast by the Seine and several smaller rivers. 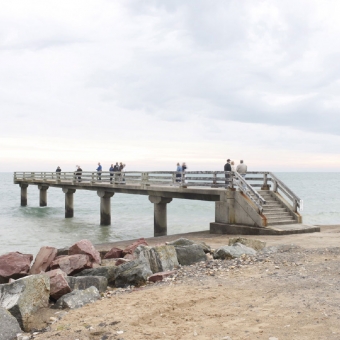 A promenade built on top of old structures built by Allied forces in WWII on Omaha Beach. 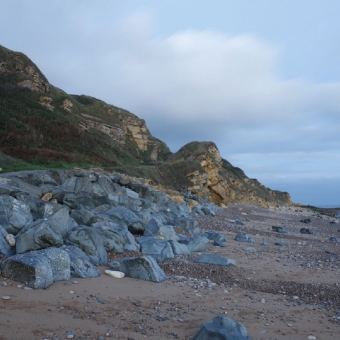 Omaha Beach, and the approximate location of where British commandos swam ashore in 1943 to take soil and sand samples to test the geological strength of the beaches in preparation for D-Day. 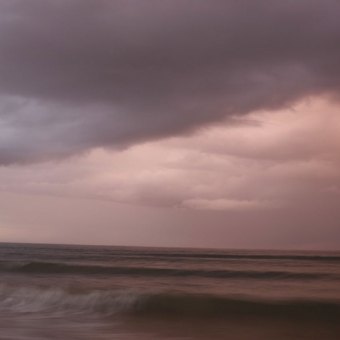 The location on Sword Beach where the ‘Mad Piper,’ Bill Millin, landed and led soldiers under fire, helping to boost morale as the soldiers stormed the beach. 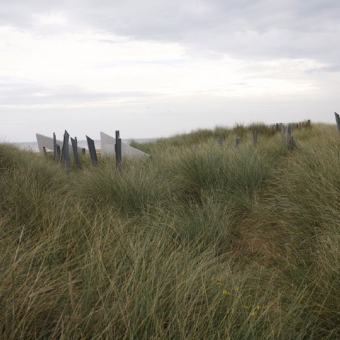 Juno Beach, designated the invasion beach for the Canadian soldiers, was the scene of one of the most bloody landings. After the American beach of Omaha, Juno suffered the heaviest losses.

–Tim O’Brien, The Things They Carried

Until I read Tim O’Brien’s fictional account of the violences, reveries, regrets and memories of a company of American soldiers in Vietnam, I did not understand what it meant to tell a story about war. And yet what I read and re-read between those pages was not, in fact, a story about war but about the impossibility of telling a story about war even as the story presses us to be told. Stories, he suggests, console us from
the fractures of memory. Against the fallibilities of being human, stories somehow persist.

Long after the age of the human, the Anthropocene, what stories of our wars will remain?

Wartime sacrifice on the beaches of Normandy in 1944 is well known. Massive casualties, but great success. Allied soldiers, numbering in total over 156,000, penetrated into German-occupied France on D- Day, June 6, 1944, and stoutly held their positions despite repeated counter-attacks by German divisions.

Shrapnel has survived in D-Day beach sand for almost 70 years. How long these particles will remain is uncertain, but iron alone can probably survive beach abrasion for thousands of years. When memory of these wicked days are long forgotten, the sands of Normandy will hold the last remaining memory of WWII.

Vast quantities of Allied and German war material can be found hidden amongst natural sand grains on the beaches of Normandy. Shrapnel, bullet casings and armour plate are still there, transformed by the action of the sea waves and the sun’s heat into an array of micro-artifacts that span the divide between technology and nature. Archaeologists have said that up to 8 percent of the sand is made up of this shrapnel. Waves, storms, and rust will wipe this microscopic archaeology from the coast long after humans have disappeared, and with it, the physical remembrances of WWII.

I have explored the new science of archeological micro-photography, which is an appropriate tool to contemplate both our historic sacrifice, and the meaning of war in our modern world. The Nadler Institute of Archaeology defines microarchaeology broadly, as the “study of archaeologically related materials under the microscope. This discipline focuses on the observation of minuscule occurrences in the archaeological record that are invisible to the naked eye to investigate a broad spectrum of cultural and historical questions.”

I walked the beaches of coastal Normandy in June of 2013, the same month of the Allied invasion, gathering hundreds of samples from each of the five invasion beaches (Utah, Omaha, Gold, Juno and Sword). Focusing my camera on the detritus of the war effort in this pivotal moment of WWII, I intimately record the reclaimed transformations that time and nature have effected on our collective memory.

Working closely with the Department of Physics at Queen’s University, the project makes use of a scanning electron microscope (SEM) to photograph the remaining war sand, collected from my walks along the D-Day beaches. The microscope has the ability to see the chemical composition of the sand, allowing us to see which particles are war detritus.

Using techniques from this scientific discipline, War Sand focuses on the cultural and historical meanings of the Allied landings. Using a variety of special lenses to document the micro-artifacts will provide us with important visual documentation and interpretation — a series of deep-window snapshots to reveal secrets of a tragic and heroic encounter that will soon disappear forever.
My work is about the remembrances of nature, which records the reclamation of Nature of man-made sites. I have previously created a visual history of violent clashes between our social constructs and the natural elements that reveal the truth of our civilization’s trek through time.

Photos from my previous trips to similar aftermath sites were made in the forests of Russia, Chernobyl and Fukushima, Japan.

The humanness that despite everything still attaches to these transforming, post-cataclysm items will be the real focus of my War Sand project. This has been a key subject of documentary photography since its inception. Celebrated 19th Century American photographer Timothy O’ Sullivan traveled through the rural landscape of the Civil War, to show us what had just taken place, carefully depicting its stark and broken absences. His pictures showed us the secret workings of early Machine Technology, a new aesthetic of terror.

I must return to Normandy, to carry on creating a ‘cosmological’ survey of the nature of landscape, documenting the rhythm of time and weather and geography on the landscape of war. I must return to continue photographing the beaches as they are today. Geology is a segment of time; and time is our most important asset as photographers, something we all dearly need. There are so many different elements that come into play as time passes; the loneliness and beauty of the beaches packed up for winter, the wind and the unpredictable weather, the tourists returning to the sea. This needs to be documented. Normandy bears little resemblance to the images I knew from LIFE magazine and the history books. War Sand asks questions about history and geology, and about memory and time.