“A Woman’s War” explores the post-conflict experiences and struggles of women who played a frontline role in Bangladesh’s liberation struggle of 1971, and who have, since the war’s end, not only had to struggle for equal rights and recognition, but also for their dignity, honor, and idea of womanhood.

“As a woman Freedom Fighter I feel proud, all women cannot do what I did; I was not just a housewife or passing my time in India as a refugee. I was fighting for my country.” —Rounak Mohal Dilruba Begum Rounak Mohl Diliuba Begum, pictured here in the sitting room of her home in Bogra, recruited, organized, and helped train six groups of young men to fight in Bangladesh’s Liberation War of 1971. Raised by her mother after her father passed away when she was 6, Rounak was the only one of the family’s four daughters for whom they could not secure a marriage. When asked if she faced any difficulty in Bangladeshi society because she was a single woman, she smiled and said, “I move rough and tumble. No one can stop me.” Bogra, Bangladesh. June 13, 2011. 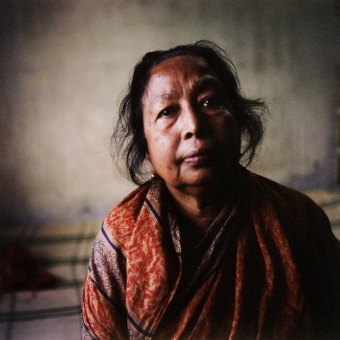 Rabeya Khatun fought alongside her husband and son in the Liberation War of 1971. During the nine months of conflict between March 25, 1971 and December 16, 1971, Ms. Khatun lost her husband in battle and watched as soldiers killed her son during a raid on their home. She now lives alone with a hired help in Barisal, and has received no recognition or compensation for her service from the state. Barisal, Bangladesh. April 6, 2011. 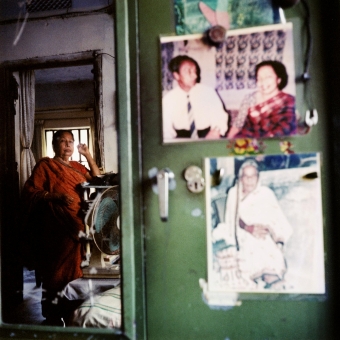 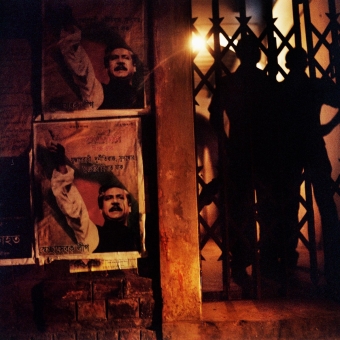 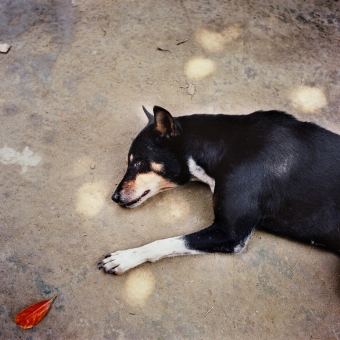 A dog rests on the ground at a village home. Norshingdi, Bangladesh. April 17, 2011. 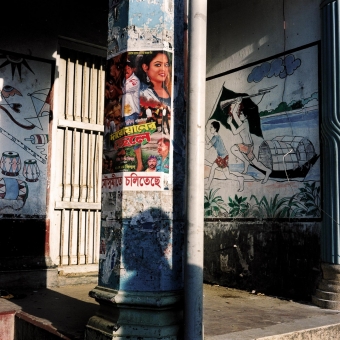 Murals depict scenes from the Liberation War on the walls of a movie theater in Sirajganj city. Sirajganj, Bangladesh. June 15, 2011. 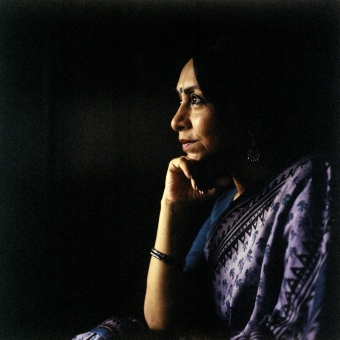 “I sang for the soliders. Before they would take the field for battle, me and the others girls would gather together and sing to them songs of freedom. Then they would go and fight for our liberation.” —Dalia Nausheen 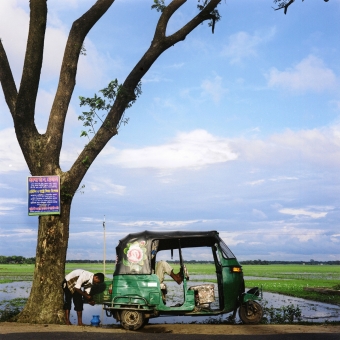 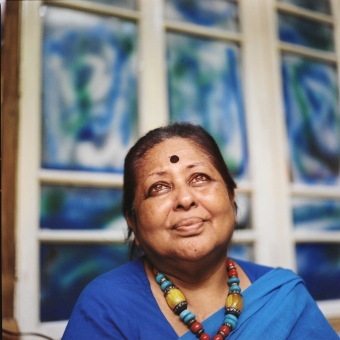 A famous Bangladeshi sculptor, Ferdousi Priyabhashini is pictured here in her home in Dhaka. Ferdousi was one of the first women to speak openly about being raped by West Pakistani soldiers during the war, pushing back, against the societal taboo that forced many women to keep silent about their experiences of sexual assault during the war. Since the end of the war, she has been a strong and persistent force pushing for acceptance and justice for those women who were raped during the war. In the past many years, she has become a renowned artist, developing her own sculpture technique in which she sows and grows plants in carved pieces of dead wood. Out of death she cultivates life. Dhaka, Bangladesh. June 29, 2011. 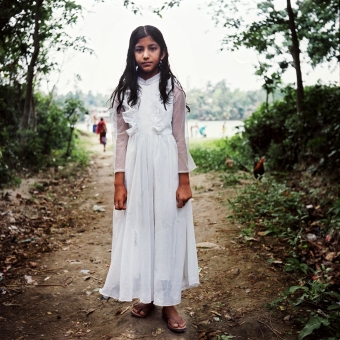 A young girl walks just outside of Kushtia city, where a number of decisive battles took place during the Liberation War. Kushtia, Bangladesh. March 18, 2011. 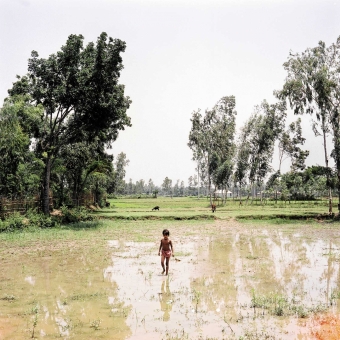 A child walks through a flooded field in Bogra. Bogra, Bangladesh. June 2011. 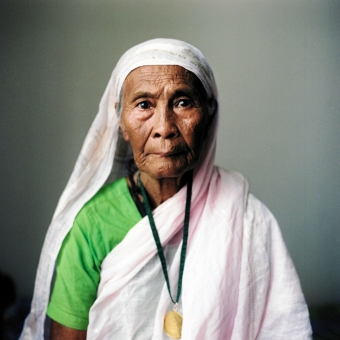 “I have lived with these wounds in both of my legs for my whole life. I got them while fighting with Sector 9 in the Liberation War. But the government does not pay me the Freedom Fighter stipend they pay the men. I get no help from the government. Now, my family has nothing. —Kakon Bibi Kakon Bibi, pictured here in a guesthouse in Dhaka, is widely known to have fought in the Liberation War, but receives no stipend from the government. She and her family now live in extreme poverty in the far northeast of Bangladesh. Dhaka, Bangladesh. September 18, 2011. 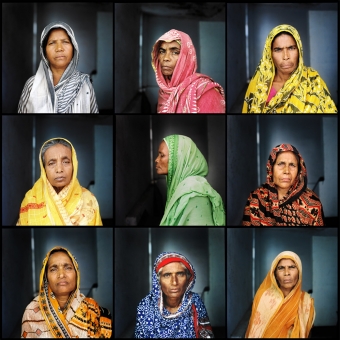 Nine women who were raped by the West Pakistani army during the Liberation War. Following the end of the war, all women who were raped were given the honorific term birangona, which translates roughly as war heroine. But the term soon became a mark of shame for the women, many of who were rejected by their families upon their learning that they had been raped during the war. These nine women are part of a larger group of rape victims who have been living close to each other in Sirajganj, Bangladesh, supporting each other in ways that their families and the government now refuse to do. They have been outspoken in fighting against the social stigma associated with rape in Bangladesh, and maintain that they should be called mukti juddha, or freedom fighters, the term given to men who fought in the liberation struggle. They all receive support from Sirajganj Uttaran Mohila Sangstha (SUMS), an organization founded and run by Safina Lohani. During the Liberation War, Safina provided food, shelter, and medical aid for mukti juddha who were receiving training in preparation for battle. Following the end of the war, Lohani established SUMS and began seeking out and providing care to those women who were sexually abused during the 1971 war. SUMS received government backing until 1975 and the assassination of Sheikh Mujibur Rahman, at which point the new government cut off all financial support and forced the organization to disband. Over the course of the next year, Lohani sought out the women who were previously under the organization’s care, and reestablished SUMS independently. Since then she has been maintaining and running SUMS unaided, with only the support of private donations.
View the photo gallery
Photographer's Statement:

This year marks the 40th anniversary of the birth of Bangladesh, a nation that emerged from a bloody fight for independence from Pakistan. The story of Bangladesh’s liberation struggle is one that is well told and well remembered by the nation; the official narratives are retold and exchanged often — and often by heart. Stories of the origins of the movement, of its key players and events, of its Freedom Fighters, or mukti juddha, who came together to fight for Bangladeshi independence and emerged victorious in December 1971 after nine months of intense guerrilla warfare, are recounted in schoolbooks and events across the country, month after month, year after year.

But the individual stories stray from these official narratives. They begin long before the start of the war in March 1971, and continue far beyond its conclusion. They are the stories of women who grew up during the heart of the Language Movement, who attended college amidst intense political and social upheaval. Who found themselves in the middle of a war-torn country — and at the frontlines of the battle for its independence.

A woman’s war is distinct. She not only has to be a fighter, but also is expected to maintain and eventually return to her traditional role as a mother, wife, and anchor of the family at the end of the conflict. Bangladeshi women played key roles during and after the 1971 war, serving as combatants, informants, nurses, weapons smugglers, and more. They also suffered its consequences: trauma, physical debilitation, displacement, widowhood, and mass rape. At the war’s end, they were faced with the dual burden of confronting the conflict’s scars, while also attempting to reconstruct their own and their families’ lives. Perhaps most egregiously, their contributions remain absent from history books, with official narratives only emphasizing women as victims. Yet, even though official narratives fail to recognize their histories, these women cope with the war’s consequences daily.

“A Woman’s War” seeks to provide another narrative of the Liberation War, as told through the words of women actively involved in the struggle. To tell their stories, I focus on three visual themes: (1) portraits of the women, (2) images of important sites for these women during the war, where individual histories were made and personal traumas defined, and (3) photographs that act as a ‘vehicle for the imagination,’ evoking the intangible memories of the conflict and subsequent search for peace expressed by the women — the dreams they hold for themselves and their children. In visualizing these three ways in which the liberation war defined the women who fought, and in coupling the images with the women’s testimonies, “A Woman’s War” examines how war affects not only those who experienced it firsthand, but also those they nurture and raise — the next generation — and how, in that way, their struggles live on.

Elizabeth Herman is a Boston-born freelance photographer and researcher currently based in Brooklyn, New York. She recently returned from a year in Bangladesh as a Fulbright Fellow, researching how politics influence the writing of national histories in textbooks. While there, she continued work on a long-term documentary project entitled “A Woman’s War,” exploring the experiences of female combatants and the impact that war has had on them, both during and after conflict.

In addition to Bangladesh, she has completed chapters of the work on female members of the North Vietnamese Army in Hue, Vietnam, female revolutionaries in Cairo, Egypt, and is currently working in the United States on American female veterans of the wars in Afghanistan and Iraq. The work was named a 2011 Finalist of The Aftermath Project, a 2011 Top Finalist of the Fotovisura Spotlight Grant, a 2011 Top Photography Project on Photoshelter, and shortlisted for the 2011 Lucie Foundation Scholarship. Elizabeth was also recently granted the 2012 Tim Hetherington Award to continue the project on women of the Bosnian War this spring.